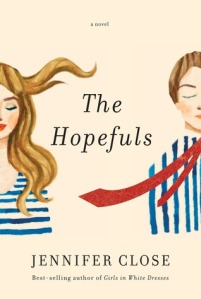 Beth can’t say she entered into her marriage with Matt ignorant of his political aspirations. But when her husband relocates them to Washington, D.C., as part of his work for President Obama, the tedious, seedy and, yes, often dull side of politics takes over her day-to-day life.

A friendship with Ash, a Texan also in the city due to her husband’s presidential connections, adds levity and companionship to Beth’s life — but Ash’s husband, Jimmy, has political goals of his own. When Matt and Jimmy become entangled in “turning Texas blue” as part of Jimmy’s campaign to earn a spot in local government, jealousy and indignation threaten to derail more than just their friendship.

Jennifer Close’s The Hopefuls caught my eye because, hello, I adore the cover. I’m also a Marylander who lives within breathing distance of Washington and am always swept up in politics, both local and national, and I’ll admit to being a bit wistful regarding the halcyon days of the Obama Administration. The story opens at the start of his first term, and it was actually bittersweet — especially given the current state of affairs — to think about how different life was then.

The Hopefuls had my attention early, gaining good ground even with the constant digs against D.C. (yes, it’s hot and humid; yes, everyone here talks about their job as a way of gaining status), but my enthusiasm for the story flagged by the time Matt and Beth departed for Texas to help with a weirdly unattainable political campaign put on by Jimmy.

Told from Beth’s first-person perspective, I expected … more of Beth in this story? As it stands, she’s merely an observer — and not a terribly interesting one at that. Though we’re told she’s a writer, she spends her time in Texas complaining and wandering around the house she and Matt now share with Jimmy and Ash, “helping” with the campaign here and there but ultimately doing nothing but seething with rage as Matt comes increasingly distant.

There was so much potential in a subplot regarding whether Beth actually wants to have the child she knows her husband longs for, especially as all of their coupled friends start families … but it never really goes anywhere, at least not in a satisfying way. Beth has an opportunity to look inward regarding the source of her anger as her closest girlfriends become mothers, but the novel just stays on-the-surface throughout. That disappointed me.

I enjoyed Close’s examination of adult friendships and liked brash Ash (hey, that rhymes), but her dynamic with husband Jimmy was pretty sad — and Matt and Beth’s marriage ultimately flounders, too. As a look at how changing priorities can impact — and damage — relationships as marriages mature, I think The Hopefuls works. But it’s just a little depressing, too.