Fall is the perfect time to read about an orchard, right?

And maybe also the right time to read about an emotionally-compromised narrator and lost treasures? And perhaps a World War II-era mystery — Nazis and daring escapes and such?

Sure. I think so.

To say Susan Wiggs’ The Apple Orchard was different than I’d anticipated is an understatement — but in a good way. I went into this 400-plus-page book expecting some romance set against a sparkling California backdrop — and Wiggs delivered on that front. But I was also treated to some mystery and some history . . . all while a burgeoning love affair simmered just beneath the surface.

So we have Tess Delaney, a purveyor of fine goods — a woman in San Francisco who specializes in finding lost treasures and returning them to their rightful owners. Save a flighty mother who dodges in and out of her life, Tess has no real family . . . and has always longed to forge a connection with others, though she isn’t sure how. When news arrives that she has a grandfather and half-sister living in nearby Archangel, Tess hightails it out to an orchard for answers — but only discovers more questions along the way.

Though lengthy, it’s hard not to get sucked into The Apple Orchard — a story brimming with entertainment and intrigue. I never became as emotionally invested in Tess’ life as I would have liked, but I was able to enjoy my first Wiggs novel as pure entertainment. It was very involved, but it never felt too heavy. I was surprised at the depth of the characters and the far-reaching twists in the plot — many of which spanned decades.

As love interests, Tess and Dominic — the banker threatening to foreclose on Bella Vista, the sprawling family orchard — are an interesting pair. With little in common on the surface save their vested interest in Magnus, Tess’ ailing and newly-discovered grandpa, the allies work together on ways to save the Archangel property . . . including locating one rare, very valuable family artifact. The romantic tension between them crackled and popped, and I spent most of The Apple Orchard waiting for them to connect. You know, ahem — really connect. The results were not disappointing.

Alternating between present-day California and WWII-era Denmark, Wiggs does an admirable job of connecting so many characters across generations. One plot point involving the fate of the family treasure felt a little hokey to me, especially as far as Tess’ father’s fate was concerned, but that was a minor ripple in an otherwise enjoyable story.

Also, the setting really made the novel for me . . . and I totally want to go hang out in an orchard now. Maybe like the one we wandered last year in Syria, Virginia (pictured below). Cider? Apple picking? Prancing through the rows like I’m Julie Andrews in “The Sound of Music”? I’ll take it. 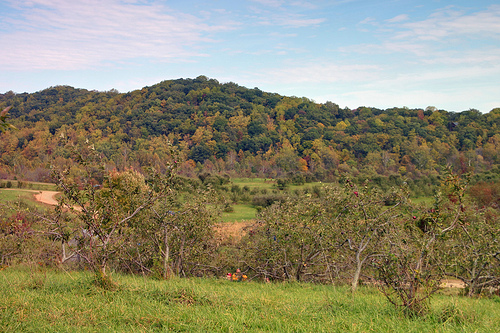 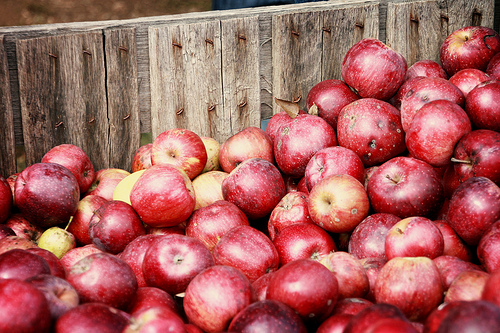