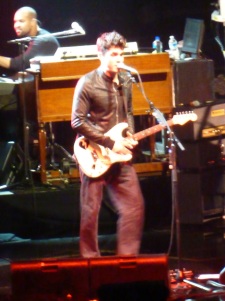 So my love for a certain guitar-playing, loud-mouthed, tattooed and sensitive rocker has been well–documented by yours truly in the past. I know he often blurts out inappropriate and offensive things and that’s definitely not okay, but I’ve spent so much time with John Mayer — almost ten years now — that, you know, I kind of feel like I know the guy.

Know him through his music, anyway. And during last night’s stop in Washington, D.C. on the Battle Studies tour? The man did not disappoint. Crooning some of my favorite tunes like “Why Georgia,” “Slow Dancing In A Burning Room,” “Assassin,” “Perfectly Lonely” and even old favorites like “Comfortable,” John bounced around the stage, interacted with the audience and generally seemed like an appreciative musician. Which I appreciated.

Having seen John five times before last night, some of my over-the-top spastic behavior has ebbed away — leaving me better able to enjoy the show without screaming my head off, bouncing up and down like a lunatic or screaming in my sister’s face. All of which I have been known to do! No, the Battle Studies tour featured a much more subdued Meg as an audience member — and that’s okay.

Because not dancing my rump off and moving the entire time? Let me snap a few, um, hundred photos. Here are some of my favorites! If you’re interested in the full set (and one shabby video I took during “Belief”), visit my Flickr page. 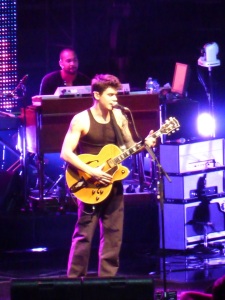 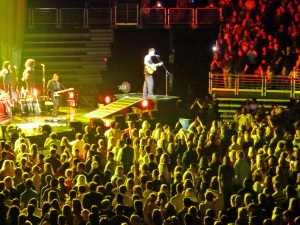 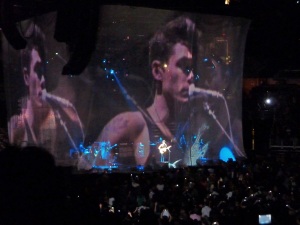 Here’s my not-so-secret confession of the day: By the tender age of 12, I was one of the biggest Hanson fans on the planet (the other being my younger sister, of course). We knew all the words by heart; screamed and cried when the blonde-haired brothers appeared on the screen; our bedrooms were adorned with every poster from Teen Beat and Tiger Beat we could get our little hands on. To date, Kate and I have seen the boys in concert more than a half dozen times — and grown up with them, too.

I won’t wax philosophical on you . . . suffice it to say that Hanson has been an absolute constant in my life since Kate and I first saw their “MMMBop” video on VH1 (yes, VH1) in June 1997. We were sitting with our parents in the living room, all of us eating pizza, and my dad said something like “those kids like they’re your age” (how right he was!). More than a decade later, I still lovingly play “Thinking Of You,” “Where’s the Love” and all the newest records over and over (I’m pretty partial to “The Walk”, their latest album, released in 2007). I know my parents and grandparents will recall all those summers I sat around with my Walkman, my grainy “Middle of Nowhere” cassette playing over and over. I had enough Hanson shirts to wear a different one every day for three full school weeks — and frequently did! My best friend Kelly and I would often coordinate them, going with the “green shirt” one day and the “black shirt” the next. We had our own Hanson code — no English necessary. I’ll dedicate a future post to all of our Hanson adventures . . . I have plenty of hilarious stories and blackmail photos to share!

So zipping along — 2009! Brothers and bandmates Isaac, Taylor and Zac are all married with kids of their own. (No word yet on just how musically inclined they are, but my money is on very!) Taylor has actually branched out and is lead singer of . . . another band: Tinted Windows. Their debut album was out last Tuesday and, without a second thought, I grabbed that puppy off iTunes. I had no idea what to expect — or even what their sound was like. But if Taylor was the voice of this crew, there was no way my loyalty would wane!

Because let me tell you — Hanson fans? Loyal. Fiercely, embarrassingly loyal. When Kate and I saw them in Falls Church, Va. last year (and then wound up lost in Southeast D.C. trying to get home afterward), I took more than a few elbows to the face as my fellow fans clambored over me to get just a wee bit closer to Isaac’s sweaty face or Taylor’s keyboard.

So I’m listening to Tinted Windows, my heart hammering at the sound of Taylor’s familiar voice filling up my car and iPod. Hanson is my band and I love them as a unit, but honestly — Tay (yeah, after 12 years? We’re on a nickname basis) is the voice I associate with the group. Wherever Taylor goes, I go.

And so I boldly dove into the tunes of Tinted Windows, a band that . . . is awesome! Their music is decidedly upbeat, quirky and fun — and perfect for the summer. I’m so tired of listening to the same stuff over and over again, and I can say for sure that this album will be the one I associate with the summer of 2009. (Uncoincidentally, I associate “The Walk” with summer 2007.) Their single “Kind Of A Girl” is a great song to crank up and sing in the sunshine . . . which is exactly what I did while driving to see my best friend on Saturday. The sun was out, the air hot and windy, sunglasses were on, windows were down . . . I’m young, alive and free. It’s the sort of fun, energetic music that reminds you to be in the moment — to stay here and now, remembering everything that’s good and awesome about the world.

Okay, I know. I promised I wasn’t going to wax philosophical! But when it comes to books and music, it’s hard for me not to get all . . . squishy on you.

So back to the songs. We have eleven of them — twelve, if you get the bonus track from iTunes. The thing that really surprised me was the lack of anything “slow” — another reason it’s a great warm-weather album. Nothing to bring you down here. My favorites are definitely “Messing With My Head,” “Dead Serious” and “Back With You” — the classic combination of awesome lyrics, great rhythm and energetic appeal.

I’m pretty much in love with it.

Check out the album on Amazon or visit the band’s official page.

Happy Valentine’s Day! The illustrious — and infamous — day of love. However you’re celebrating (or uncelebrating) today, I’m sure some music is swirling around lovebirds everywhere. In honor of this festive occasion, I present: my favorite ‘real’ love songs of all time! Yes, another of my “lists.” I love lists.

I’m picking based on certain very unscientific data: what I feel! And a “real” love song, to me, isn’t something that sings about birds chirping or the sun shining in your eyes or . . . well, anything that sappy. I have felt that cheesy before, sure, but most of the time love is about a lot more than chocolate-covered kisses and close embraces and all-encompassing passion. Those things are super, I agree, but they do not a tried-and-true love make. So my top five “real” love songs, in random order:

The Beatles, “I Want To Hold Your Hand”

However you feel about it, I think Nick & Norah’s Infinite Playlist got it right: Love is all about wanting to hold hands. It’s about the small and quiet moments, the simple gestures, the desire to be close — without any need for anything more, or anything less. It’s about just being together.