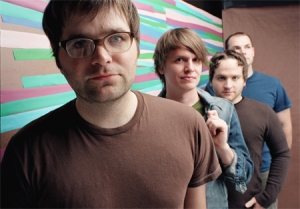 I’ve had boyfriends introduce me to all sorts of music — artists I probably never would have listened to, or appreciated, had I not sat in their cars as songs blasted through our open windows or let the tunes lilt over us on lazy Sunday afternoons. To me, these artists are synonymous with the relationships — and when I think of a man I once loved, I invariably hear the opening chords of Death Cab For Cutie.

First, their songs are just . . . sad. And melodic. The lyrics are haunting, and they have a tendency to bury themselves in my skin and reappear at strange, unexpected moments. And despite being years removed from the first time I fell in love, I can still close my eyes and let “A Lack Of Color” or “Title And Registration” basically incapacitate me. It’s easy to feel confused and heartbroken anew with the same soundtrack blaring in the background.

So, despite the fact that I want to bawl my eyes out every time their songs pop up on my iPod, why do I keep listening to them?

Well, I love them, first of all. Their music is complex but straight-forward — filled with simple tunes constructed in a unique way. The lyrics seem to pluck right at the heartstring I most don’t want plucked at a particular moment — and remind me why it is I fell in love with their songs — and one man — all over again.

Would I have become so attracted to their music if I hadn’t been introduced to them by someone else? Probably not. His presence in my life — and his absence since — has shaped me far more than I would typically admit. And the music he exposed me to has been my companion since he left.

Is that the rock-hard truth here — that I listen to his music to feel close to him?

This is the part where I’d probably curl up inside myself, shake my head furiously and deny it — probably spouting out a snarky comment or two, rolling my eyes and babbling self-righteously about how I’ve “moved on.”

So I’ll just play “Transatlanticism” a little louder, burying the speakers deep inside my ears, and go on with the day. 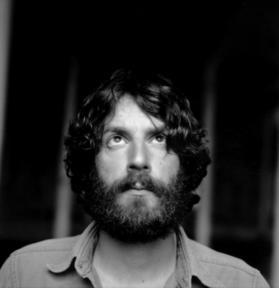 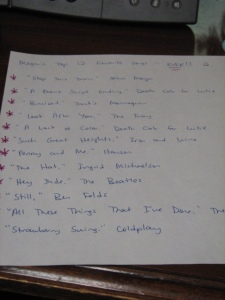 In another of her thoughtful schemes, Kelly asked me for a list of my top 12 favorite songs “of all time” the other day. What she’s doing with said list, pictured at right, I’m not sure . . . but it was fun thinking of my answers! She wanted my “desert island” songs — the songs I could listen to for the rest of my life and never stop liking.

Like most people, I’m a huge fan of music — mostly in general. You’ll have a hard time finding me without iPod in hand, flipping through my little crafted playlists and searching for good working music, or writing music, or running music . . . or whatever music. So I thought, Hey, since I listen to so much music during the day, all of my favorite songs should be found pretty easily. The greatness that is the iPod creates a special playlist for you: Top 25 Most Played.

But I was shocked. Of all the songs in this “top 25” list, I wouldn’t necessarily consider many of them to be my favorites. I like them, obviously, but they’re not my all-time, can’t-breathe-without-this-song classics. Most of them are tunes I’ve recently discovered, or great songs by artists relatively new to me.

So, I will now present the two lists — and I’ll limit my “top 25 most played” to just 12 songs. In the interest of uniformity!

Megan’s Top 12 Favorite Songs of All Time! (in random order)

Jack’s Mannequin and Death Cab made it on both lists; so did Ingrid Michaelson, though not for the same song. John Mayer, my FAVORITE musician ever, is not in my top 25 most played list! How is this possible?

So there you have it — my “desert island” songs. And, apparently, all the other tunes I actually . . . listen to.

And now it’s your turn! What are a few of your “desert island” songs? Do we have any in common? 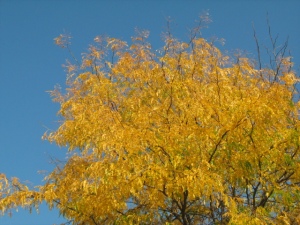 Now that it’s officially cold outside (I’m in a hoodie every moment I’m not in “fancy” dress clothes!) and I’m running in and out of my heated car and office building, it’s time for some excellent cold weather tunes!

Everyone has music that reminds them of special things in their life — summer, winter, senior year, college, first love . . . music is what connects all of us and brings us back to those really incredible points in life like nothing else can. Between music and getting a random sample of cologne while out innocently marching through a department store or grabbing groceries, I can find myself nineteen again — or five, or twelve, or twenty-two.

And musically, the fall for me is all about . . . thinking, reflecting, becoming all nostalgic and crazy. I guess it’s the whole cyclical nature of things — getting ready to usher in another holiday season, looking back at all the time that has already passed, putting away the sandals and replacing them with boots and jackets. It’s another transition. And these are the folks that always come along for the ride with me . . . 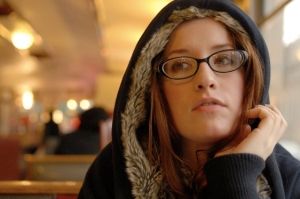 I adore her whimsical, light and pitch-perfect voice. I don’t think life gets much better than hunkering down in your Toyota, waiting for the heat to kick on and defrost your windshield while humming along to “The Way I Am” (the sweater song from the Old Navy commercial — yeah, you know it), “The Hat” or one of her newest ones, “The Chain.”

“The sky looks pissed. The wind talks back . . . my bones are shifting in my skin. And you, my love, are gone. My room seems wrong. The bed won’t fit. I cannot seem to operate. And you, my love, are gone. So glide away on soapy heels and promise not to promise anymore . . . and if you come around again, then I will take the chain from off the door.”

I bought Ingrid’s album Girls and Boys last fall and listened to nonstop through Christmas . . . it’s one of my favorite albums to listen to while writing. In fact, my NaNo novel last year was built in part after listening to “The Hat” for the hundredth time! Such an awesome song.

“I knitted you a hat all blue and gold to keep your ears warm from the Binghamton cold. It was my first one and it was too small; it didn’t fit you at all, but you wore it just the same. I remember the first time we danced. I remember tunneling through the snow like ants . . . What I don’t recall is why I said, ‘I simply can’t sleep in this tiny bed with you — anymore.’ I should tell you that you were my first love.”

Her lyrics sort of punch you in the gut with their simplicity — when you say “I should tell you that you were my first love,” there’s no real hiding from that — or misinterpreting it. It just is.