We had a pretty fun and different holiday weekend — Palmer and I went with my parents to the newly-renovated Ford’s Theatre in Washington, D.C. to see “The Heavens Are Hung In Black,” a new play based on the life of Abraham Lincoln following the death of his young son during the onset of the Civil War. The play was a tad long, but the two intermissions helped break up a little of my sleepiness! We were seated in the very last row of the balcony, but we could see very well. I thought the show was expertly done, and the acting superb — and hey, I could hear most everything that was being said! That’s a definite edge over some plays I’ve attended in the past.

Palmer in front of Ford’s Theater

Line to see the home in which Lincoln died

Waiting to take our seats!

Bust of Mr. Lincoln behind our seats 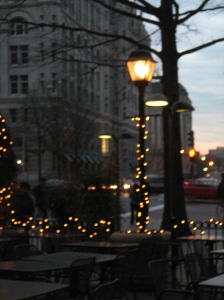 Outside the Elephant & Castle

After the show, we walked down to have dinner at the Elephant & Castle — a British pub just a few blocks away! We had a great dinner — I got fish ‘n’ chips! — and pretended like we were back in London. The warm pub pretzels were a big hit. And, of course, we couldn’t head home before stopping at a bookstore — so it was off to the giant Barnes & Noble by our parking garage!

I was bad and got two books (and paid full price — gasp!) — Little Women and Markus Zusak’s The Book Thief. After reading Geraldine Brooks’ March a few weeks ago, I was astonished to realize I’ve never read the classic Louisa May Alcott novel on which it’s based! I found the B&N classic version, which was only $6.95. I can spring for it. And The Book Thief is supposed to be incredible, and I love literature based on Jewish characters… so I went for that, too! Not that I’m, you know, wanting for anything to read… I’m ashamed to actually show my TBR stack at the moment. My “stack” has actually become three stacks, and I’m worried that a slight brush of my arm or foot will send one or all completely crashing to the ground! I probably have 60 books waiting for me, easy. That terrifies me a bit. I’m stuck in the middle of Elizabeth Noble’s The Reading Group — I’m enjoying it, but it’s… long. And there are about a million characters. I like all of them, but trying to keep track of them is proving headache-inducing.

Speaking of books — Mom found this cool bag boasting two wonderful bookish quotes! I wasn’t prepared to shell out $14.95 to own said bag, but I did snap some photos. And hey, the first one is from none other than Abe Lincoln himself! 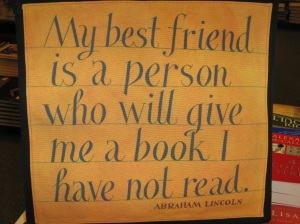 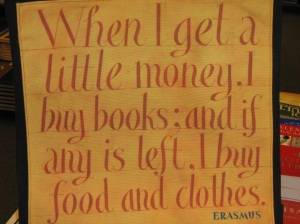