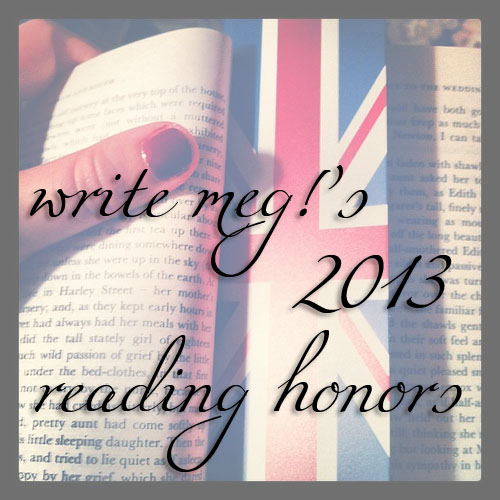 So this was a big year for me.

Planned two weddings, moved out of my childhood home, married the love of my life. All that fun stuff. There were a few getaways, some serious weight loss, new friendships and lots of photography.

What there wasn’t much of?

I could make excuses all day, y’all, but the long and short of it? My reading was really down this year. Like, really down. Last year I read 71 books, then correctly predicted wedding planning would occupy much of 2013. In 2011, I read 83 books, and finished 2010 with 85 books read.

This year? Fifty. Fifty even.

Still nothing to snort at, I guess, but I feel like I’ve failed literature somehow. Realistically speaking, I was often too consumed with errands to hunker down with a story. And when I radically changed my eating habits in 2013, I stopped going out for lunch — my former devoted reading time — entirely.

But I want to get back on track next year. When I’m not emotionally invested in a story (like now), I really miss that feeling. I love looking forward to the end of the day, when I’ll curl up in bed with my current read and lose myself for an hour or so. I’ve been too tired to do much more than collapse at the end of the day, so . . . I guess I hope to catch up on sleep in 2014, too.

Even with a smaller list than usual, there were some stand-out reads in 2013. Some were recently published; others are from a few years back. All of them were awesome. And so, without further ado . . .

Gripping, moving, absorbing, fantastic . . . all terms I’d use to describe O’Hara’s novel, set in a Massachusetts town slated for ruin. From the atmosphere and setting to the rich, complicated romantic life of Dez, our heroine, I was entranced from the start. It’s a story that has lingered with me long after I turned the final page, and it’s my favorite read of 2013.

2. The Rosie Project by Graeme Simsion

Fans of “The Big Bang Theory” may see shades of Sheldon in Don, our main squeeze, but Don is determined to succeed where his counterpart has failed (or has little interest): finding a “perfect mate” who satisfies his exhaustive criteria. A geeky love story with tons of heart, this was an incredibly fun read that had me cheering for Simsion’s rag-tag group of characters.

Described by yours truly as “part family saga, part cautionary tale, part love story,” Straub’s novel of an aspiring small-town actress is as engrossing as it is heartbreaking. I really wasn’t sure how it would pan out — and stayed glue to the narration to find out. Though long, it was a memorable and worthwhile read.

One of two audio books to crack my Top 5, Samuelsson’s memoir of working hard and rising in the culinary world was an eye-opening, interesting experience. Born in Africa and raised in Sweden by adopted parents, Marcus relies on his tenacity and diverse background to gain traction as a chef. He’s humble, devoted and honest — and I loved learning his story.

Strayed’s memoir — another audio — found me at just the right time. Her story of hiking the Pacific Crest Trail solo was very moving, even if the twists and turns in her adventure made my stomach turn. I can’t imagine walking in her footsteps . . . which was what made her introspective, challenging journey so engrossing.

As part of my personal goal to read more non-fiction each year, I picked up Kelle Hampton’s Bloom, a memoir about welcoming her daughter Nella — who has Down’s Syndrome — into the family. Knowing readers could judge her, Hampton honestly recounts the difficult days surrounding Nella’s birth and how the family has moved forward and thrived in the years since.

Book That Made Me Grateful For My Relationship With My Sister

Lucina Rosenfeld’s The Pretty One. Ladies be crazy!

Book Most Likely to Make You Miss ‘Gilmore Girls’ Like Crazy

Lauren Graham’s Someday, Someday, Maybe, of course! With the trademark wit that made Lorelai Gilmore such a heroine for many of us, Graham’s debut novel follows a young woman trying to make it as an actress in ’90s New York. Funny, poignant, fresh.

I dare you to pick up Bob Harris’ The International Bank of Bob and not make a mad dash for your wallet. A travel writer who visits some of the most lavish resorts on Earth for a living, Harris can’t help but be affected by the great disparity between the world’s wealthy and its desperately working poor.

He makes microloans, has great success helping others, travels to meet some of them, writes an awesome and influential book to tell us all about it. Bob is humble, funny, self-effacing and hugely inspirational. Loved him, loved the book. Go change the world, y’all.

Most Scandalous — Both In Its Day and, Like, Now

Sex, drugs, discontent . . . just another day in the world of Pamela Moore’s Chocolates for Breakfast. Courtney is a total mess, and it totally works.

Strangest Storyline — In a Good Way,
I Think?

Lydia Netzer delivers Shine Shine Shine, a book about astronauts and baldness and young love and abuse and aspiring to more and . . . probably some other things, but I can’t puzzle them all out. Months after finishing, I still can’t decide if I really liked this book or was completely confused by it. Maybe both. Regardless, it’s memorable and certainly different — both excellent qualities in a novel!

Most Confusing and Totally Too Cool for Me (and You)

Choire Sicha’s Very Recent History. Seriously, what the heck was going on? I’d tell you, but I’m still not entirely sure. It was occasionally interesting but often rather dull and disjointed and just . . . not my cup of anything.

Best Use of Bees as Characters

. . . That would be Sarah-Kate Lynch’s Wedding Bees, my friends! As you might have gathered, this modern-day fairytale incorporates honey and its creators in a lovely story of redemption and love. Perhaps a little sticky-sweet at points, but that’s part of the fun.