Oliver successfully took his first plane ride. On our way to visit family outside Buffalo last week, we opted to take a one-hour flight rather than make an eight-hour drive — a choice that wasn’t without its stresses, but was ultimately wise.

I was ridiculously nervous to fly with an infant. Much of that anxiety probably stemmed from being seated by wailing babies on multiple flights (most of them cross-country, of course), and we didn’t want to be “those people” who have a child losing it in the dense confines of an aircraft. I didn’t know how I would deal with the stares and grimaces. People can be ugly . . . especially when traveling.

But oh, our Oliver. He barely made a peep on our way to and from New York. He got upset just once, letting out a frustrated shriek before beginning to wail, but that was aboard a shuttle bus on our return yesterday — when we were just a few minutes from the car. A diaper change quickly calmed him down, as did being back in his normal car seat. So we’ll take it.

Sailing by Baltimore on our way home, we looked down at the city with its spires and stadiums. Among them is the tower, a spindly historic structure that sticks out prominently among the modern buildings downtown. I can’t see it without thinking of the day before our son was born, how we studied it as minutes bled into hours as our family celebrated at my baby shower many miles away. The tower was the only interesting thing to look at on the most stressful day of my life.

It was mid-April, and spring appeared overnight. We watched the pear trees burst into bloom from our corner room, startled by their bright contrast against the dark tower. The sun was brilliant. It was a perfect day. And it was also interminably long, waiting to see if my blood pressure would stabilize. If we could go home. If I would stay pregnant. If our baby would come.

Through those dark early days, I couldn’t have imagined a future where Oliver was healthy and so physically on track, giggling and “dancing” and smiling at the sound of our voices, the sight of our faces. Everything felt scary. Nothing was normal. I didn’t know how to have a baby, much less a preemie baby. I was afraid.

But spring arrived, brilliant and new, and soon became summer. Oliver flourished, and Oliver came home. We poured our love and attention into helping him grow. He’s now our not-so-little love, and all 17 pounds of him cry out for hugs and kisses. We give them.

He now sleeps through the night (more on that to come), so we are all sleeping through the night. I am less zombie, more relaxed mother. Summer is swiftly turning to fall, all crunchy leaves and roadside apples and steamy pumpkin drinks. We are learning to “talk” and play, to stand and mimic and grip. We are laughing. We are happy.

On our plane ride home, Oliver clutched Spencer’s finger in one hand and mine in the other. He watched the skies intently through our tiny porthole, dark eyes dancing across the clouds.

We encircled him, our dear child. The tower disappeared from sight.

You know, I fancy myself a sophisticated woman. I talk easily with most people and feel reasonably comfortable networking. I have a full-time job, write religiously and am devoted to my family and friends. Though I might not be the snappiest dresser around, I carry myself with an air of confidence.

In short, I think I’m a good person. And a grown-up. And a decidedly logical woman.

Until Taylor Hanson shows up. 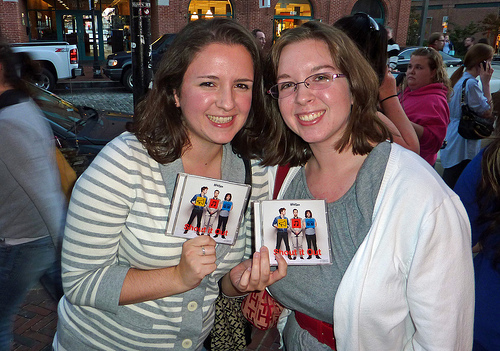 Hanson is a real-life fountain of youth, my friends. One moment I’m 25 and chattering with my sister and boyfriend, and the next I’m 12 and wallpapering my bedroom with posters while listening to “Middle Of Nowhere” on repeat. It doesn’t matter how many concerts I’ve attended in the past (seven, I believe); heat overtakes my body the moment my favorite band appears.

On Saturday at The Sound Garden in Baltimore, Md., I arrived with Katie and Spencer to find a crush of girls milling around a makeshift stage in the tiny music store. It struck me immediately how much we all looked alike: young women in leggings, jeans or boots; some of us in glasses and some with ponytails; many in lightweight jackets or flowing tops. We were redheads, brunettes and blondes. We were all in our 20s.

We were all obsessed with Hanson.

Getting there early worked in our favor: we were right near the small stage for Hanson’s in-store performance. And as it drew closer and closer to 4:30 p.m., the magic time they were scheduled to appear, my eye rarely left the door. My attentiveness was rewarded with a glimpse of the Hanson brothers pulling up in a cab, then disappearing; my mouth opened and closed like a fish. Not my most glamorous moment.

“They’re here!” I hissed to Katie. I figured yelling that any louder would be the equivalent of shouting “FIRE!” in a crowded movie theatre and, you know . . . that’s illegal.

While we were waiting and my excitement was growing like a sparkly weed, I had this uneasy sense that I didn’t want Spencer to see me like this. I mean, I’m his girlfriend — a writer; a daughter; a friend. I pride myself on being level-headed and poised. As a general habit, I don’t run around screaming and crying over . . . another dude.

But, you know. Some things are beyond my control. 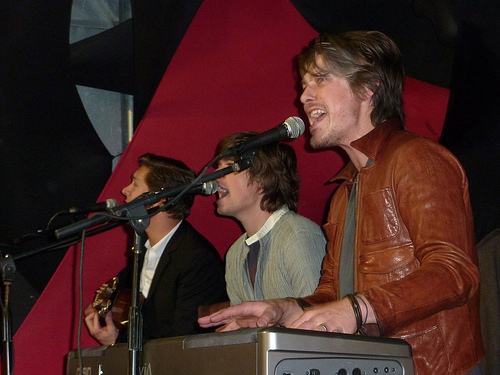 When Hanson finally made their way toward us, camera flashes exploded from all sides. Voices lifted up in madness, shouting and calling and whistling. Someone screamed. It was something about being soclose to them, and in broad daylight, that sent a serious tremor through me. Just to the right of the stage, I could have lunged forward and grabbed Taylor’s boot. And when they launched into “Shout It Out,” the title track from their new album, Katie and I were dancing with the best of them.

The performance went on this way: me singing and shouting; Katie and I grabbing each other when Taylor looked right at us and grinned; me worrying that Spencer thought I was a total nutjob.

“Are you going to break up with me after this?” I asked him between songs, taking in the scared deer-in-headlights look on his face.