When I daydreamed about becoming a mom, the vision of reading to my curly-haired children (who do, in fact, have curly hair!) often included a book in my hands. I did the whole “read to your belly” thing when pregnant, even though that felt awkward. And I started collecting children’s books long before I had the children themselves.

It’s taken a little while, but for the most part? I think we’re raising readers, which makes me so happy. My daughter, in particular, loves to share stories; she’s always schlepping into our “library” (now more of a giant toy box, let’s just be honest) to grab a book and plop into my lap. Oh, the joy. Alllllll the heart-eye emojis.

Hadley is now two and a half, and Oliver is four. Both have Fire tablets (I know, I know!), which tend to occupy their attention … but my husband and I have been pretty diligent about controlling their time spent in front of screens, even though it’s just so dang easy to let them zone out while I do … well, anything. Like cook dinner. Or go to the bathroom. Or answer the group text that’s gotten out of hand.

But I don’t want glassy-eyed zombie kids sprawled out in the living room. The tablets have their time and place — but we read to the kids nightly, and try not to reserve stories simply for bedtime. I say this not to be smug, but to really say that we’re making an effort! I think that’s my mom motto: making an effort. Trying. Striving.

So here’s what they’re loving lately . . . and what I’m loving, too. Because let’s be honest: there’s nothing fun about re-reading PAW Patrol: To the Lookout for the 97th time!

Just try telling that to my son.

I Love You Just Like This by Sesame Workshop: The “Sesame Street” love is still going strong at our house, and this sweet story about how much Elmo’s mom loves him has great illustrations and all those beloved characters. I will totally own that I tear up at the end, too. 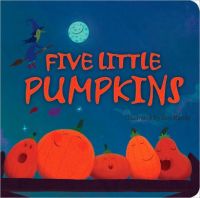 Five Little Pumpkins by Tiger Tales and Ben Mantle: OK, how adorable is this? I have such fond memories of this story told in song form when my sister and I were in elementary school. I bought this book for Ollie as a baby and can’t resist its charms. Neither can Haddie.

Pop-Up Surprise Haunted House by Roger Priddy: Cute rhymes, captivating (and spooky!) pop-up characters — Hadley can’t get enough of this one. Our record is fives times in a row.

The Little School Bus by Margery Cuyler and Bob Kolar: Driver Bob picks up students en route to school, and I love how inclusive and sweet this story is. (Also, Bob drinks coffee faithfully — I feel you, Bob.) Ollie just loves all the vehicles and enjoys finding kids who “look like Uncle Eric.” The whole series is really fun! 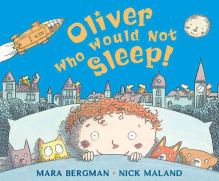 Oliver Who Would Not Sleep by Mara Bergman and Nick Maland: Ohhh, the irony. Not terribly surprising that my son loves a book spearheaded by a little boy named Oliver who refuses to go to bed, preferring his adventures in outer space. We read this nightly, and the cadence of the story is soothing.

Goodnight Tractor by Michelle Robinson and Nick East: This book is a total snoozefest — and I mean that in the best way. It’s like a drug. I barely get to the halfway point when my rambunctious guy will pass out cold. It’s melodic, fun to read (and listen to), and definitely perfect for tractor lovers.

I’ve been trying valiantly to get the kids into Dr. Seuss, pulling out all my childhood favorites in the process. I had some success with The Lorax after they watched the recent version of the film with its candy-colored Truffula trees. One Fish Two Fish Red Fish Blue Fish is next on my list! Man, that book captured my imagination as a kid.

I’m guessing this will be surprising to exactly no one, but I can still barely through through On the Night You Were Born by Nancy Tillman without breaking down into tears born of love, fear, and everything in between. Reading it to Ollie takes me back to the night he was born, finally coming into the world at almost 10 p.m. Phew — read at your own risk.

What books are you sharing with the little ones in your life?

Do you have a favorite Seuss classic?

Are you weirdly surprised to see me posting on a random day in September?

I swear I’m still chugging along, though I do find myself spending less time on social media and being more thoughtful about what and how I’m sharing online. Not out of fear, per say … but an awareness that I’ve been putting my life out there for a long time, and sometimes it feels right to reserve a little something for my family … and myself.

Does that make sense? I don’t know. One thing hasn’t changed: I’m still tired and drinking way too much coffee. But I’m home with a stomach-sick Hadley boo today, so it felt like the right time to check in. I’m still here, and you can also catch me on Instagram. Hi!