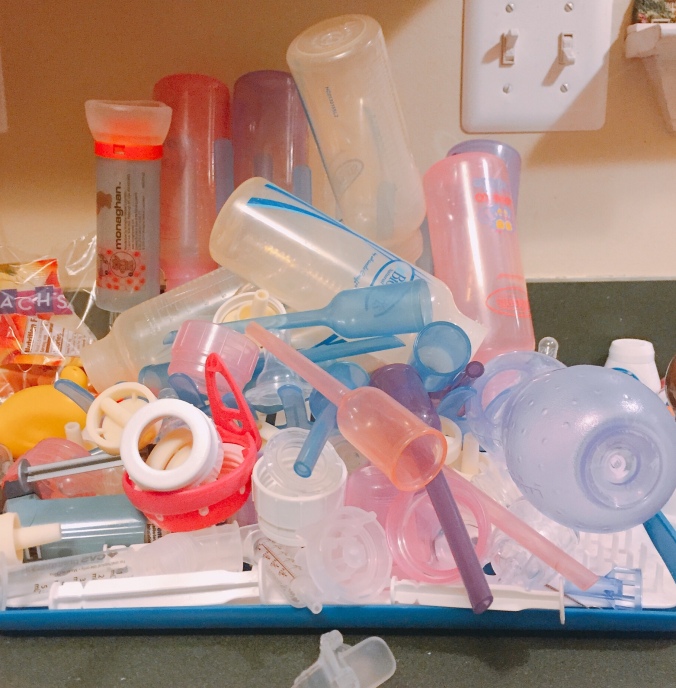 After four years of faithful service, we have said goodbye to Dr. Brown.

The bottle rack that took up real estate next to our sink has been scrubbed clean, along with the dozens of bottle parts and vents and unused scrub brushes and … well, all the accoutrements. And I do mean all of them.

The kitchen counter looks naked now. We hadn’t even lived in our house a year when Oliver was born. The sudden appearance of baby bottles — bottles on tables; bottles in bags; bottles always, always, always in the sink — was a reminder of how different our lives had become overnight.

When Ollie had been home a month or so, I remember standing bleary-eyed in front of the sink. We have a bank of windows in that sunny corner of the kitchen, and the day looked beautiful. Everything was green. Lush. Early summer. And I could barely absorb any of it, as trapped as I felt indoors.

Is this my life now? I thought.

I was still hand-washing baby bottles then. That seemed like what I “should” be doing. I was so screwed up, so weighed down with exhaustion and anxiety … but for some reason, I was adamant — obsessive, even — about cleaning these bottles by hand, as if that time-consuming process was penance for not feeling all the sparkly-glowy feelings of new motherhood.

It got better, of course. Mostly because I got better. It’s hard to talk about postpartum anxiety, even though I feel like I’ve told a million women before and since that they should never be afraid to ask for help. I was afraid to ask for help. I couldn’t find the words, even with my own husband. Our story had the added complication of preeclampsia and prematurity, and I felt so guilty for feeling anything but grateful that we were both frickin’ alive that it really … just complicated things. Everything.

A stigma remains around mental health — around the raw vulnerability of saying you are struggling, especially as a new parent. It’s supposed to be *~the HaPPieSt time of your LiFe*~ and to admit that taking care of a baby 24/7 can really suck isn’t a popular opinion.

Still, it’s true. I love my children dearly, it goes without saying, but I have struggled. The newborn years have been hard. But in time, sunshine began to filter through the fog … and here we are, almost four years later, and there’s nothing I look forward to more than coming home each day to the pounding of toddler feet running to meet me at the door. (Except maybe a piece of chocolate cake after they go to bed, but that’s another story.)

Hadley is sassy and wild and hilarious, learning so much every day. Oliver is opinionated and observant and incredibly smart, and I love our morning chats and bedtime stories and the way he tucks his head onto my shoulder at the end of a busy day.

With Hadley now fully transitioned to a cup, the “babas” had to go. Spencer was the one to make that executive decision. I was very wistful as I packed up the last of her 24-month bodysuits, neatly sorting our daughter’s new 2T shirts into piles in the top drawer of her dresser, but I could do it.

The bottles were another story, though. They have literally been with us from day one. I felt very tender toward Dr. Brown and his special bottles as we prepped everything to pass along. For as much as my husband and I have dreaded washing all the individual parts, they have served us well. Seen us through hard times. Been entrenched in the very origin story of the Johnson family of three, then four.

It’s the end of an era. But that “naked” corner of the kitchen is already filling with hair ties used to wrangle Hadley’s wild curls, boxes of cookies, Ollie’s PJ Masks toothbrush. New treasures seem to filter in every day.

Hadley’s Minnie Mouse cup is the new mainstay, and I have zero qualms about putting that baby in the dishwasher.

The relentless march of time does have its advantages.