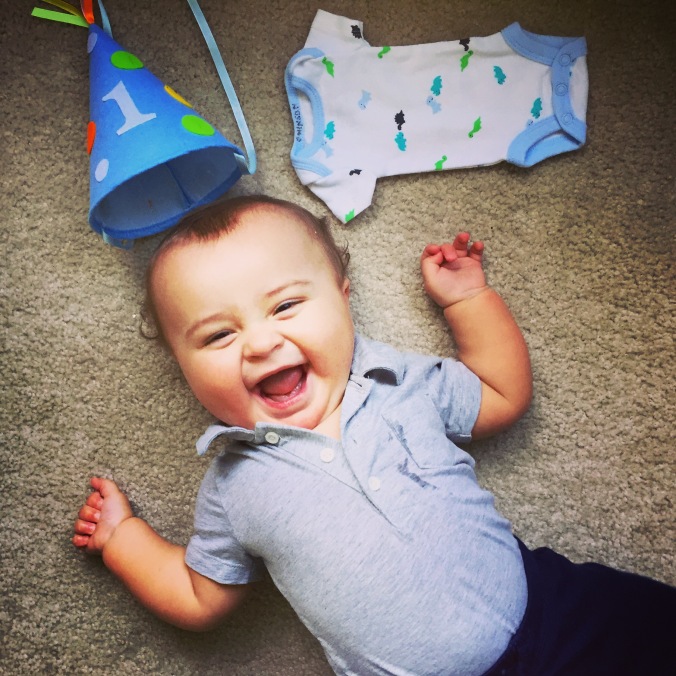 Last week was Oliver’s first birthday. After speaking with many preemie parents about approaching their child’s unexpected birth date, I worried I’d slip into a funk — remembering my hospitalization, steroid shots, the late-night ambulance ride, the blood pressure cuff that went off day and night . . .

But somehow, it never happened. There was no funk, no sadness. Spencer and I took the day off to celebrate — and we did! Oliver didn’t know it was his birthday, of course, but it wasn’t like we could concentrate at the office. I just wanted us all to be together.

We went for a walk, took photos, exposed Ollie to the magic of blowing bubbles. He laughed with us and grinned and squirmed in our laps, permitting my (many) kisses and trying his first cupcake. My parents and sister came by, too, and we sang “Happy Birthday” with gusto.

On Saturday, we hosted family and friends for a big birthday blowout — and, in a weird way, it was healing for me. Not to harp on an old subject, but I missed my baby shower while I was hospitalized last spring. It might seem silly, given the seriousness of that whole situation, but I was devastated. I still have a hard time thinking about it.

Having loved ones gathered at our house almost one year later to the day, when Ollie has come so far . . . that was therapeutic. And realizing I felt nothing but joy and gratitude on Oliver’s birthday? Well, I feel like I’ve turned a page.

Growing up, my parents would joke that it wasn’t technically “our birthday” until the exact time at which we were born. I came into the world at 10:21 a.m. on a hot July day, so we’d watch the clock until then. If my mom was at work, she’d call at that exact moment to sing “Happy Birthday.”

Ollie was born at 9:57 p.m. — about 14 hours after I was induced on a Sunday. I will always remember the sunrise that morning: the streaks of pink visible from our corner hospital room with the lights of Baltimore beginning to blink off. It was still dark when the kind Midwestern doctor came in to say we couldn’t wait: the baby needed to come that day. And by nightfall, he had.

After Ollie was born and whisked off to the NICU, I told Spencer he could go be with him — my first experience with having my child outside my body. Until that moment, I don’t think I’d processed that my little someone was actually someone: his own someone. We were no longer a unit. I could no longer protect him. And maybe I never had, with a failing body and fearful heart.

Clearly, I still wrestle with Oliver’s early birth. It can be hard for me to talk about preeclampsia. But as time presses on, I dwell less and less on how Oliver arrived and just rejoice in the fact that he did.

He is well. He is happy. He is so very loved.

Though Oliver was asleep by 8 p.m. on his birthday, Spencer and I stayed up to mark the hour. At 9:57 p.m. this April 12, we were sitting quietly with the television down low.

We talked of Oliver’s arrival: the “practice push” that needed no practice at all; the soul-shattering pain that melted into instant relief; the doctor who called out, “Happy birthday!” and extended our baby for me to kiss before everything fell quiet, and I was alone.

I thought of the exhausted, overwhelmed, half-broken woman collapsed in a hospital bed after the strangest day of her life. I replayed the moment I saw my son through blurry eyes, frantically asking for my glasses so I could see his face (I didn’t).

That was only the beginning.

A year later, we are tired — and we have been tested. I have laughed and I have cried, felt like I was going crazy and stepped back from the brink. Spencer has been by my side through everything, every good and painful moment: and though there were times we were not our best selves by any stretch, we were still those selves together.

Our sweet boy is upstairs, asleep in the crib where I once slept, and I can’t help but laugh at how unprepared we were.

Unprepared. That word in this context? Well, it’s funny. Because being “unprepared” means you could, in theory, actually have been ready — and that’s just not true.

No one is prepared for parenthood. You cannot be prepared for parenthood. Even if you’ve changed 10,000 diapers, babysat all the neighborhood children, helped raise a niece or nephew, been a teacher or a nanny or just a concerned friend . . . until those little eyes look up at you, a face that leans always toward your own burning sun, needing everything you have to give and much of what you don’t . . .

How can you prepare someone for that?

When I creep into my son’s room and see his little face peeking at me from between the slats of his bed, the way he “growls” and now reaches his arms up for an embrace, when he lowers his head to my shoulder or gently strokes my arm . . . these moments shatter me. In a good way.

Nothing can prepare you for how much you’ll love this little person.

At 1, Oliver is sweet and curious, funny and charming, active and so good-natured. Our boy has never met a stranger, offers smiles easily and misses nothing in his observations. He plays well by himself, but prefers company. He’s patient to a point, but soon wants your full attention. Ollie loves daycare and his first friends there, and we are beyond fortunate to have his wonderful babysitter in our lives.

He lives for “The Muppets,” ABC’s new TV show. No “Muppet” movie or TV show or cartoon will do. Spencer and I have seen every episode dozens of times, even acting out the dialogue and quoting Kermit, Fozzie, Piggy, Pepe, Uncle Deadly, Rizzo and gang to each other out of habit. We live and breathe “The Muppets.” I’ll never look at them the same way again and, forever and ever, they’ll have a special place in my heart.

Oliver is still toothless (!), but we see the telltale white caps beginning to break through on bottom. We’ve been taking our time with feeding, still offering mostly formula in a bottle, but Ollie has been doing much better with a spoon. To date, the only food he has not liked is birthday cake! He gobbles up vegetables and fruits, and is starting to pick at Puffs and other small snacks. He’s more than content for you to feed him, though, and plays with utensils and sippy cups more than he actually uses them.

Ollie rolls anywhere he wants to go, which is usually to the front of the television cabinet to look at “the baby” in the glass — and loves to kick his legs and smack anything (and everything!) with his purple rattle. He’s doing much better with balance, sits completely independently and is now doing a combination scoot/crawl that gives him some independence. From the moment he’s up until the moment he crashes, he is a study in motion. The boy does not like to sit still for a moment!

Despite my best efforts, Oliver is just now starting to pay attention to books. His interest in them has mainly been to chew on and tear at them. But persistence pays off: I recently looked over to find my son reaching for a touch-and-feel book on his own. He runs his fingers across the “fur” of an animal or “wheels” of a truck, and loves turning pages by himself. The look of concentration on his face when he’s “reading” — bottom lip stuck slightly out; eyebrows furrowed — is priceless.

Ollie strings together sounds easily, but hasn’t seemed to connect them to the world just yet. Everything is “ba ba ba” or “bob,” and he loves to grunt and growl while flapping his arms like an eagle. He screams out of happiness and displeasure, and is easily the loudest person in any room.

When I get close to his face and encourage him with “Mama,” he often smiles coyly and puts a chubby hand on my arm or leg. We try again — “Mama, Mama, Mama”; Ollie giggles and looks away. I can’t help feeling like he knows I want him to say it, to say that “magic word,” and he’s just content to make me wait.

But that’s OK. It will be worth it.