Many moons ago, I stumbled upon a piece by Allison Tate: “The Mom Stays in the Picture.”

I was newly engaged, blissfully planning my wedding, not yet close to being a mother. I was also in the best shape of my life. In 2013, I lost 35 pounds and was the happiest, prettiest and most confident version of myself to date. I felt young and beautiful. I was powerful: Meg 2.0.

I read Tate’s post because it spread through my social networks like wildfire, discussed and “liked” by many high school friends and coworkers toting toddlers of their own. Many noted the piece was a tear-jerker, so I clicked over.

It’s a beautiful piece. Solid and honest and real. It resonated with me, the importance of mothers taking pictures with their children, but I read it from a distance — and as a photographer myself. But I just wasn’t there; I didn’t feel it. I’d grown up in a household with parents who photographed everything, and my mom is still our family historian. I’ve lived my entire life in front of the lens.

Why wouldn’t I want my picture taken?

Though never weight-obsessed, exactly, I’ve struggled with my size for the better part of adulthood. Getting down to a healthy weight in 2013-14 was a major accomplishment for me, and I had hoped to continue my solid habits after getting pregnant. I was afraid of slipping back into old habits, you know? Ones I worked so hard to break.

But I did, of course.

There are many reasons why. I was pregnant, for goodness’ sake; if I wanted a milkshake, I got one. My pregnancy and subsequent release from the confines of tracking every Weight Watchers Point was refreshing. Though I love WW and plan to return to the program, letting myself stop obsessing about every pat of butter, jelly bean and French fry felt . . . good.

And there were complications. My weight ballooned rapidly with the onset of severe preeclampsia. Close to my delivery date at 32 weeks, I was swollen beyond measure and in physical pain, my face and feet and hands all puffy and foreign to me. I felt bloated and uncomfortable, though I’d chalked it up to “third trimester woes.” Learning that my illness was causing most of those symptoms was surprising but, later, a relief.

In the three months since Oliver was born, I have shed 30 of the 60 pounds I gained in pregnancy. Most of it was water weight that fell off within a week. My post-childbirth body was unrecognizable; I barely looked in a mirror for weeks. Having a baby in the NICU meant every shred of my energy, care and concern went to him, and weight was not on my mind. Not even a little.

Once Oliver was home, gaining weight himself and getting stronger, I began to consider stepping out of my maternity jeans. I was tired of feeling lumpy, frumpy and weird, though I had no idea what size I now wore and knew that stepping on the scale would be a rude awakening.

When I finally did, I was shocked by the number I saw: almost exactly where I’d started when I joined Weight Watchers in January 2013. To the pound.

It seemed a cruel joke: after all that discipline and hard work, adopting new habits and changing how I think about food, I was right back where I started? On top of the trauma of Ollie’s premature birth and my lingering blood pressure concerns, I felt overwhelmed. Depressed, even.

Still, since April, my attention has been on nurturing our 3 pound, 9 ounce baby boy to more than 13 pounds of pure chunk and love. My husband and I adore this baby to the tips of our toes, and I could spend hours just looking at his little face.

But I’ve had to look in a mirror, too.

The early photos of Oliver are of . . . Oliver. Because I’m our little family’s photographer, I documented countless tender moments between Spencer and Ollie in the NICU and beyond. There are a handful with me in them, too, but I didn’t press the issue. I rarely handed Spencer the camera.

I had dozens of excuses, you know. So many excuses for not taking pictures with my baby. I cut myself some slack because Ollie was hospitalized for a month . . . and I was lucky to remember to bring snacks and my cell phone on our long drives to Baltimore, let alone stage a photo shoot once we got there. I was more concerned with locating a breast pump than my camera. That was how it had to be.

Our Oliver grew stronger. He learned to take his feeds by bottle, to regulate his body temperature outside the isolette, to widen his little eyes and gaze out at the world. On May 7, Spencer and I finally got The Call: bring the car seat, baby – he’s coming home!

As exhausted as we were in those early weeks (er, months), I knew documenting that time was important. I tried to take as many pictures as possible, sneaking in time to upload them when Ollie snoozed. Many were with my iPhone, because that’s what I had handy. By the time my maternity leave ran out in mid-June, I wanted to have all the photos I’d taken so far organized and ready for an album.

And I would look through them, this collection of precious images, watching Oliver’s cheeks begin to plump and his little eyes widening. I saw the rolls appear around his sweet baby wrists, and the pudgy thighs that have now started supporting his weight as he “stands” on my lap.

But I’m not in many of them.

My own mom has taken thousands of photos of me over the years — and many with Oliver in my arms. Lately, I haven’t focused on his cheeky grin or adorable ears. With laser-sharp precision, I see my double chin and flyaway hair — and I cringe. And puff out my cheeks. And want to untag myself on Facebook, though I don’t.

The truth? I’m self-conscious. I’m uncomfortable. After publicly embracing Weight Watchers and documenting my weight loss journey in my newspaper column, on Facebook, through this blog . . . well, it’s a little embarrassing. There is such pressure surrounding “post-baby bodies,” and it doesn’t help that two other new moms in my life have already seemed to return to their svelte pre-pregnancy selves. Others complimenting them is not an insult to me, but I can feel my cheeks burn when others praise how great they look. So I look away.

I know no one faults me for not slipping back into my skinny jeans — that it’s not about the skinny jeans, really. I know I’m being too hard on myself, and that no one notices the “flaws” we point out in ourselves.

And more importantly? And I know that, above everything else, I am not a body. We are so much more than our looks. A number on a scale does not determine my self-worth.

But I still don’t feel great. I feel slow and unhealthy and . . . like I did before. When I was a me I’d never planned to be again.

When I look through the home photo shoots I’ve staged with Oliver, my husband is in many pictures. One of my favorite shots is of Ollie peeking up at his dad, one fat fist extended, as Spence looks on and smiles.

Spencer is wearing an old gray T-shirt. He hasn’t shaved. To be honest with you, I’m not even sure he’d showered that day (sorry, babe).

And you know what? No one cares. It doesn’t matter. You can’t even tell.

So why did I beg off when Spence offered to get me in the frame?

Since he came home, I’ve taken pictures of Ollie every two weeks. I like to do them on Sundays, before the chaos of another work week, and try to edit them before Monday morning. Oliver was born late on a Sunday night . . . so that feels reverent to me, too. A reflective time.

Spence helped with Ollie’s 14-week shoot, as he always does. I took the classic photos of father and son I’ve come to know so well. But when I lifted the baby to reposition him, Spencer lifted my camera off the bed and turned it on me.

But I thought of Allison Tate. I thought of the collection of pictures on my laptop, all of a precious baby boy but not his mother. Of a woman pushed into motherhood two months earlier than planned, and how much I longed for and planned and endured to bring this baby into the world. Of how much I’ve changed, and how much stronger I’ve become.

And I stepped in.

I’m stiff in the first few. You can sense my awkwardness as I stand in my plain, new-ish shirt that already looks old, stained with spit-up and soft from many washes. My hair has grown long since the spring, and I’ve taken to pulling it into a messy, unkempt knot at night. I’m wearing makeup, but it’s smudged and minimal. Reminders of teenage acne dot my cheeks. I look tired.

I think I look beautiful.

I didn’t expect that. Didn’t dare even hope for it. When Spence wanted to take pictures of Ollie and me, indulged him because he’s my husband and I love him and, deep down, I would like photographic evidence that I was here during this time in my son’s life.

I mean, I’m obviously here. I’m catching tossed pacifiers, making bottles, changing the diaper trash in his nursery, washing onesies. I’m avoiding his splashes during baths in the sink and laughing with his dad over his hilarious expressions, doing anything and everything I can to make him grin.

I’m rocking him at 2 a.m., and 3 a.m., and sometimes 4 a.m. His dad and I are making major and minor medical decisions for him, looking for symptoms and calling doctors. I’m dealing with insurance, grappling with post-NICU anxiety, folding his blankets. I’m sending long missives to friends about he’s doing and uploading his sweet, chunky face to Instagram.

But he won’t know that. He won’t remember.

“I’m everywhere in their young lives, and yet I have very few pictures of me with them,” Tate writes. “Someday I won’t be here — and I don’t know if that someday is tomorrow or thirty or forty or fifty years from now — but I want them to have pictures of me. I want them to see the way I looked at them, see how much I loved them. I am not perfect to look at and I am not perfect to love, but I am perfectly their mother.” 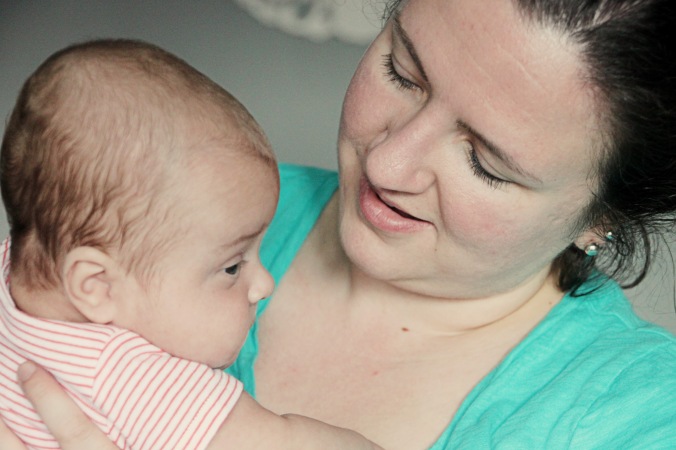 I look through these photos from a sunny afternoon and feel joy, and hope, and love. I sense all the dreams I have for Oliver pouring from my arms into his little body. I see the recognition in his own face — This is my mother — and feel my own: This is my son.

My body hasn’t “bounced back” from baby. That double-chin is prominent. I look exhausted and greasy, a little threadbare and worn thin at the edges.

But I’m in the picture. I want to always be there, holding and loving him.

And thirty years from now? My 30-year-old son might turn to me and smile.

63 thoughts on “This mom stays in the picture”