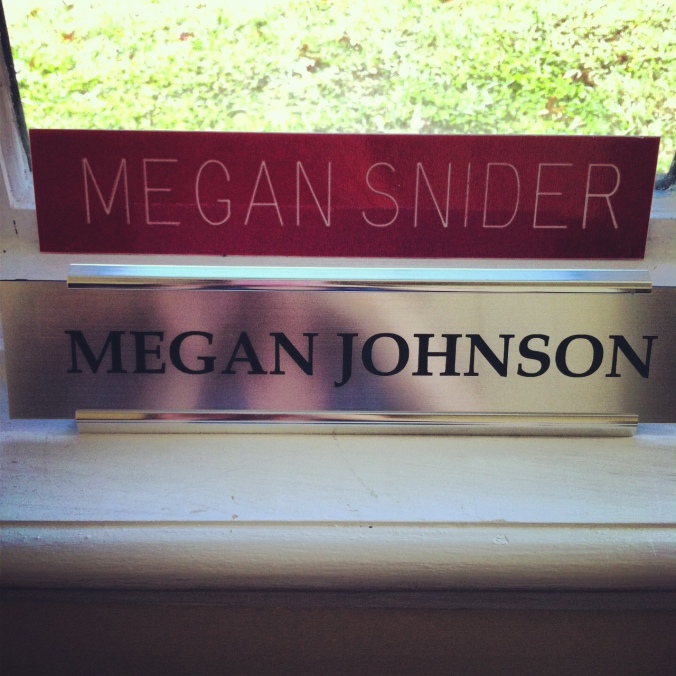 In the past nine days, I’ve slowly started becoming a Johnson. It’s exciting, scary — and everything in between.

In the months leading up to the wedding, I toyed with the idea of . . .

It took me a while — and a bit of soul-searching — but I’ve ultimately decided to take Spencer’s last name. The choice is very personal, of course, and feels “right” to me. My husband has been very supportive of whatever I want to do, and I’ve been uncertain about it — but at the end of the day, my marriage marks a great change. A step into the future. And I feel like Johnson is that refresh I’ve been wanting.

I’m still me, of course. But I’m married me. And it will feel good — albeit scary — to take a new name.

Of course, these are all just words floating around the universe right now . . . I haven’t taken any legal steps to change just yet. Honestly, the idea of changing my entire identity makes me want to cower under a table fort made of old sheets at my grandparents’ house (which everyone knows is awesome). My younger sister has started the process, as has a newlywed coworker, so I’m relying on them for help and advice.

But I did make one big alteration: I changed my name on Facebook. That might as well be legal, right?

So it’s all fine and good to become Megan Johnson on a screen, friends, but that left me with another decision to make: what to do at work. Regardless of what I chose legally, I always thought I’d keep Snider somewhere in my moniker — either as a middle name or hyphenated part of Johnson. Since I write for a newspaper, I considered it a pen name. I thought it would be a nice homage to my roots.

Whatever I put with my column on Wednesday would set the tone for everything to come. If I’m Snider-Johnson now, even just professionally, that’s how I’ll be addressed by friends and readers alike. Staring at a computer screen on Monday morning, I realized I had to make a decision. A real decision.

Am I changing my name — or not?

It suddenly seemed strange to go halfsies . . . to be Snider-Johnson some places, Johnson or Snider in others. Which is it? Who am I?

Can I be both?

Caught up in the excitement of the wedding, I avoided the name-change issue. Friends have already started calling me Mrs. Johnson, and I love the way it sounds . . . but it’s still so foreign. But like all things surrounding my nuptials, both large and small, I’m sure it’s just a shift to which I’ll have to grow accustomed. I’m sure I’m not the first woman to look around in confusion when the doctor beckons “Mrs. So-and-so” out of the waiting room. (Who? Me?)

When the time came to put my byline on tomorrow’s column, I made a decision I didn’t expect.

So far, being Megan Johnson — at least in spirit — is pretty similar to being Megan Snider: both women are readers and writers, photographers and dreamers, daughters and sisters and friends. But the former gets to be part of my refresh, my reboot: my big, bold steps into whatever comes next with my husband.

If you’ve changed your name, how did it make you feel?
Did you ever feel uncertain about your decision?
Are you happy with the choice you ultimately made?

60 thoughts on “That crazy name-change issue”