Have you ever attended a double bridal shower? If not, you totally should. It’s basically as fun and exciting and overwhelming as you’d imagine, plus chock-full of desserts and other sugary goodness! Though I doubt too many other people would be crazy enough to attempt something on this scale, we rocked it. Everything went beautifully.

I may have mentioned it, oh, 120 times, but my sister and I are both brides-to-be. Because our weddings are only six weeks apart, we thought it would be too much to ask our mutual friends and family to attend two showers in a very short time period. Also, my separate shower would have had to been planned for the time immediately before or after Katie’s wedding and, well, that was a recipe for chaos.

Two of our aunts organized and spearheaded this four-hour bonanza — and they were incredible. My aunt Jacki could go into event planning because she’s just. that. good. I’m not posting photos of them because I’m not entirely sure they’d be comfortable being on The Internetz, but trust me when I say that both ladies were fantastic (and are just all-around great people).

About 55 women attended on a rainy Saturday and I was truly delighted to see all of them. Though I get nervous in crowds and generally dislike being the center of attention, I knew I’d have to put aside my anxieties to focus on enjoying the day. And I did! Having so many of my favorite people in the same room at the same time was nothing short of awesome, and I was blown away by everyone’s kindness and generosity. Katie and I couldn’t have asked for a nicer event.

Also, I’m so excited that many of my good friends now know each other! And everyone knows Spencer. He arrived towards the end and was around to see some of the exciting cookware unveiled (like Le Creuset casserole and stock pot. Wahoo!). Having never attended a bridal shower, of course, I could see he was a little overwhelmed and unsure of the whole thing . . . but he got into the spirit!

And that’s enough yakking. It’s Wednesday — and that means photos, right? Eh, well, I guess I have a few. Here I am with my mom (left) and future mom-in-law — plus opening some gifts and generally doing what a Meg does best: eating cake and participating in all sorts of sugar-fueled socializing. 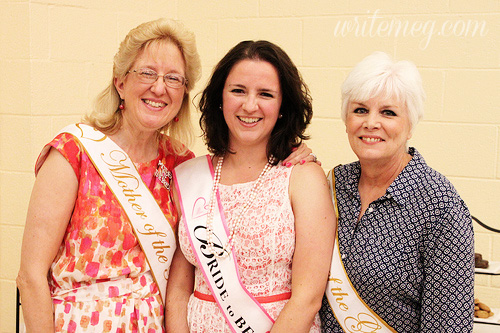 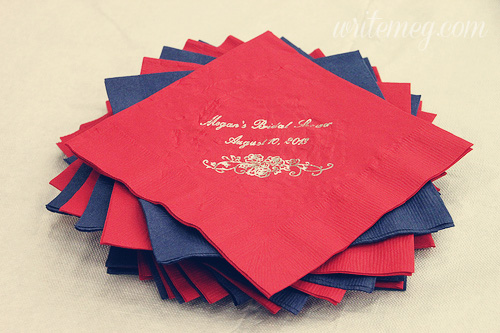 Not a bad way to spend a Saturday.