At the end of my first year of Spanish classes, Señora Volland instructed each of her pimply-faced students to choose a recipe from a massive book and bring it in to share. Being all of 13 years old with zero kitchen experience, I scanned the pages until I found instructions for Spanish-style green beans. Being a big veggie lover, they sounded delicious — and relatively simple. I had my mission.

Since first whipping up this dish fourteen years ago, I’ve brought it to countless parties, family gatherings and other get-togethers. It’s relatively easy, delicious, fresh — and a different way to prepare green beans! I don’t know about you, but I’ve consumed lots of judías verdes in my day. Usually just boiled and lightly buttered. So sprucing up a well-known vegetable is something I can get behind, and this is a favorite of mine.

I’ve prepared this dish using both fresh and canned vegetables — and the fresh ones taste best, of course. But if you’re in a pinch, go ahead and use the canned varieties. You’ll still have a happy dinner crew, promise.

Having copied this recipe down so long ago, I have no clue where it might have originated — though I found similar ones here and here. I’m super partial to my own, though. And I can smell the intoxicating aroma of garlic already . . .

In a 3 to 4 quart saucepan, bring the salt and 2 quarts of water to a boil over high heat. Drop in the beans, a handful at a time. Bring to a boil again, reduce the heat to moderate and boil uncovered for 10 to 15 minutes, or until beans are slightly tender. Drain and set beans aside.

Heat the olive oil in a heavy 10 to 12 inch skillet until a light haze forms above. Add onions, garlic and stir frequently, cook over moderate heat 5 minutes, until onions are soft and transparent but NOT brown. Stir in tomatoes, parsley, sugar and a few grindings of pepper, bring to a boil, and cook, uncovered, until most of the liquid evaporates and the mixture is thick enough to hold its shape lightly in a spoon.

Stir in the beans and simmer for a minute or two until they are heated through. Taste for seasoning and serve at once from a heated bowl. Serves 4. 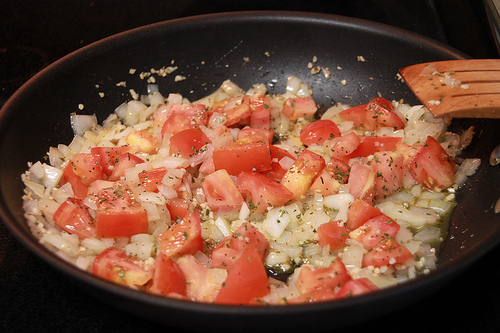 I’m linking up with Beth Fish Reads’ Weekend Cooking! Check it out for more great recipes to get you cookin’ and bakin’ before Monday.

18 thoughts on “The first dish I ever cooked: Spanish-style green beans”