Harold Fry didn’t plan to traverse the whole of England. After a letter from an old friend drops unexpectedly into his hands, he’s stricken with the knowledge that Queenie Hennessy — former coworker, one-time ally — is dying of cancer in Berwick-upon-Tweed. . . and that he never got to thank her for doing him a great favor two decades earlier. Convinced a mere letter is insufficient and his walking — and faith in her — will somehow spare her life, Harold leaves home with no more than the yacht shoes on his feet.

His wife is at home, receiving periodic calls from Harold on his progress within the silent confines of their Kingsbridge home. Maureen is unconvinced any man could walk 467 miles to arrive at a friend’s side — let alone her retired husband, an unathletic man in his 60s. But Harold cannot be stopped. As the miles slide beneath his sore feet and the English countryside gives way to scenic villages, Harold tightens his belt loops — and meets plenty of characters that aid him in his journey. But can he make it to Queenie in time? And what will he say when he gets there?

Rachel Joyce’s The Unlikely Pilgrimage of Harold Fry took me completely by surprise. It’s a quiet novel, at times slow-going, but the pace seems to mimic Harold’s progress. I was in Harold’s corner from the beginning, championing this unusual hero, and I wanted nothing more than for him to overcome every obstacle and find his friend at last. Though it often seemed impossible, I couldn’t help but believe in Harold’s strange quest. 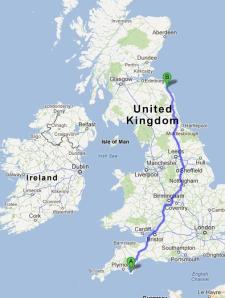 The evolution of Maureen and Harold’s relationship amazed me the most. After forty years of marriage, the pair seem to have stopped seeing one another. They drift past like ghosts, like roommates, and Maureen seems as icy-cold as they come. As the details of their shared past emerge, it’s obvious why the silence and tension have sustained them for so long — and my heart broke for both, standing so close together but so far apart. While I initially disliked Maureen and wanted to scold her for not believing in her husband’s journey, I couldn’t fault her for the pain they’d both endured. The pieces eventually came together.

Harold, the unlikely pilgrim, is such a bold and sympathetic character — a man of integrity who has survived so much. Beneath his placid exterior beats the heart of a man with much left to experience. Despite feeling old, washed-up and broken, Harold realizes he’s been lying in wait to do something for far too long. His walk opens him up to other people — their faults, their dreams. He looks outward instead of inward, realizing the capacity friendship and compassion have to fill up our lives:

“He had learned it was the smallness of people that filled him with wonder and tenderness, and the loneliness of that too. The world was made up of people putting one foot in front of the other; and a life might appear ordinary simply because the person living it had been doing so for a long time. Harold could no longer pass a stranger without acknowledging the truth that everyone was the same, and also unique; and that this was the dilemma of being human.”

My heart broke for Harold during passages like this one, moments when we realize how long he’s lived with the loneliness and guilt that have come to define his life:

“He watched the squares of buttery light inside the houses, and people going about their business. He thought of how they would settle in their beds and try to sleep through their dreams. It struck him again how much he cared, and how relieved he was that they were somehow safe and warm, while he was free to keep walking. After all, it had always been this way; that he was a little apart.”

(Also, “squares of buttery light”? What a perfect, evocative phrase. I could see Harold standing outside a rustic English cottage, watching a family settle into dinner with their laughter and mugs of tea — this family with everything he does not.)

By the novel’s close, I was cheering for Harold like I’ve never cheered before — and as the past unravels, revealing what Queenie did to inspire one man to walk across a country to thank her, I actually gasped. Middle-class Harold could have easily hopped in a car to reach his old friend, we know, but he didn’t. A journey that would have taken a day’s worth of driving took Harold several months, but it was the walking that saved him. The walking was his salvation.

Author Helen Simonson (Major Pettigrew’s Last Stand) blurbs Harold Fry, and I could detect similarities between her work and Joyce’s. Not so much in subject, but in feeling — this idea that age is just a number. Both Joyce and Simonson are British authors with older men as their subjects, and both have plenty yet to experience — and impart. I loved that Harold’s journey reminded me of the best part of Major Pettigrew’s story, and I think fans of Simonson’s popular novel will find an ally in Harold.

At the end, the text was blurring beneath an ocean of tears — ones I didn’t really expect, ones that stopped me completely. My head was so full of Harold’s journey that I had a hard time falling asleep after finishing (at 1 a.m.), and I had to pick up one of the more light-hearted books on my shelves to settle my pounding heart. Harold isn’t a character you can soon forget — and his journey of loyalty, redemption, friendship and love will stay with me for a long time.

15 thoughts on “Book review: ‘The Unlikely Pilgrimage of Harold Fry’ by Rachel Joyce”