Some things in life just have to be enjoyed twice.

Whether we want to or not.

When Spencer and I began planning our trip to California, one option on the intinerary really stood out to me: a chance to walk the Golden Gate Bridge, the enduring and universal symbol of San Francisco. The city itself has great significance to my family, what with my dad falling in love with S.F. after a school trip there in the 1970s, and my parents honeymooning there years later. We visited twice as I was growing up, but I hadn’t returned to the City by the Bay in almost a decade.

Needless to say, I wanted to cram in as much as possible.

Our Trafalgar tour had us traveling from Sausalito across the bridge, getting a sense of what it feels like to drive it. (Awesome — “Full House”-style!) When Spencer and I hopped off our tour bus, the plan was to walk the 1.7 miles end to end and be picked up on the other side. Our driver was going to wait there and transport us back to the hotel. 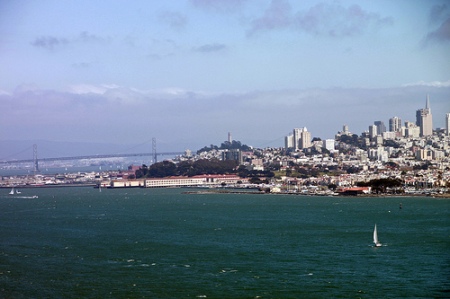 Having our orders, we set off. The bridge was filled with families and joggers, many there to celebrate the Golden Gate’s 75th birthday on Memorial Day weekend. Though our faces were soon windburned and my feet began to scream, we took in the view of downtown San Francisco, snapped lots of photos, avoided kamikaze bicyclists and eventually made it to the other side. After a brisk 45 minutes, the stairs to the visitors center were an oasis in the desert. We’d made it!

Our tour director, Patsy, caught me first. Her eyes were wild, nervous. She gripped my arm. “Don’t panic,” she shouted, “but we’re stranded.”

The word should have sent me into overdrive. “Stranded” is not something you want to hear after a windy 1.7-mile trek. But I was on vacation and, you know, for once in my life? I didn’t feel like panicking. I didn’t want to be high-strung. I wanted to bask in the knowledge that everything would work out somehow or other, and I wasn’t responsible for fixing any of it.

That was poor Patsy’s job.

Four of our 26 tour members had decided to take the walk. When Phil and John caught up to Spencer and me, Patsy paced around trying to decide what to do. Police had closed off the rest area where the bus planned to pick us up. Despite officers’ warnings, Patsy had jumped off the bus to help us get back to safety. No one knew what was going on. Rumors spread of a “suspicious package” on the bridge; others mumbled about there being too many pedestrians, or the winds being too fierce. Regardless, we had two options: walk a few miles to Sausalito, where we could catch a ferry to Pier 39, or turn around and walk another 1.7 miles back where we’d started. Another bus would grab us.

Working off some of our heavy vacation meals, Phil and John didn’t seem to mind the extra chance to take in the view and get some fresh air. Spencer was fine with it, too, snapping photos and pulling me along by one hand. I focused on taking step after step, ignoring that ugly number — 3.4 miles — just on the edge of my consciousness. Poor Patsy looked near tears, but we had no choice: it was hoof it back or be stuck near Sausalito forever.

Not that that would be a problem. I mean, have you seen that place? 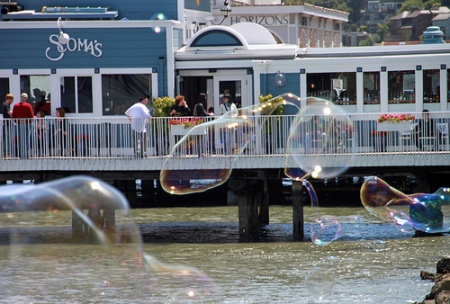 We made it back, of course. Frazzled and frizzy-haired and wind-blown, yes, but we arrived — and another bus was waiting where we started the whole madcap adventure.

And since I’d managed to burn off an unexpected number of calories that day, I didn’t mind chowing down in Chinatown. Which I did . . . heartily. Eating my weight in stir fry and fortune cookies. And I slept so deeply that night, I wouldn’t have stirred if you had moved our hotel on the Golden Gate Bridge.