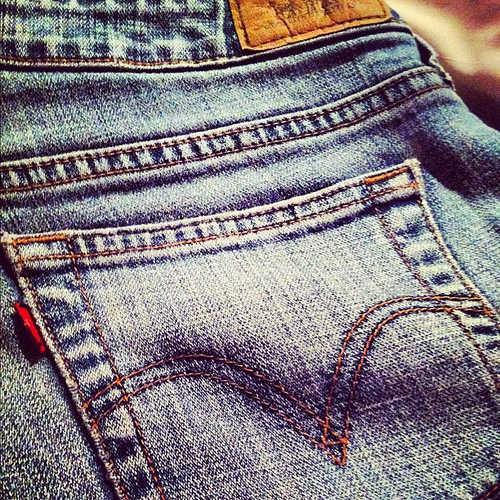 I have a bad habit of ruining pants.

The way my jeans tend to wear out, rip and tear, you’d think I was going around doing jumping jacks in the dirt after walking on my knees through concrete. After a year or two, my pants — assuming they still fit — seem tattered beyond repair. They fray, wear out and generally look awful. Part of that is probably due to buying “cheap” jeans, I guess. And the other part? I guess I just live hard.

Even my Levi’s, the most coveted of all my pants, tend not to last long. As I’m on the short and curvy side, shopping for jeans is an exercise in patience and stamina. Everything I find is either too long, too short, too snug or too loose. Nothing seems to fit my figure exactly. I know that women everyone voice this some complaint — even (or especially?) the svelte, 6’1″ types — but it’s seemed like a never-ending frustration in my life.

I’m not sure when I first discovered them. Based on my shopping habits, I’d reckon it was at a Macy’s or Kohl’s. Regardless, they had them in my size and inseam (petite/short — depending on your level of political correctness) . . . and since I splurged, they were probably on sale. These were the holy grail of jeans. They hugged exactly what I wanted to hug, didn’t come up too high (or get too low), were a lovely soft faded blue color and generally were awesome.

I wore them for years, basking in their perfect fit. They were my constant go-to pants, always there and lookin’ good. I was probably wearing them on my first date with Spencer.

They ripped, of course. The material around the back pockets became thin and worn, and eventually began to separate. Meaning, you know, it was only a matter of time before I had a serious fashion disaster. And uncomfortable moment with the general public.

Lest you think I throw money about willy-nilly, I tried to repair them myself. My stitches worked okay for a little while, but they really looked silly (and obvious) — and in time, the jeans began to fray in other spots, too. On one sad, cold day, I had to declare them unsalvageable. I’ve died a little inside ever since.

Seeking a replacement, I’ve tried for years to recapture the magic of those 545s with another jean — but nothing ever measures up. I haven’t been able to find the pants anywhere since my pants were wrecked, and Internet searching yielded nothing. I couldn’t even find a record of them on the official Levi’s website. I mean, why? It seemed like a terrible curse, a cruel prank: here, give the girl the most amazing pair of jeans ever in the history of the universe — and then ruin them. And don’t let her find a replacement. Let her live with the memory of the perfect jeans, Sisterhood Of The Traveling Pants-style, but keep them away forever.

I tried to drown my sorrows in jeans from Old Navy. I found a few styles I liked, one called the “Diva” (all right, I’ll go with it), but nothing measured up. Every other pair of Levi’s wasn’t right. In a fit of frustration, I tried on a different pair a few months back and convinced myself they were similar to my 545s, but that was a lie. And I couldn’t lie to myself when I got another look in the mirror.

After years of wearing not-quite-right pants, I returned to my trusty old friend — the Internet — and did another search for the elusive 545s. Fully expecting the bitter pang of disappointment once again, I waded through the results without my interest . . . until.

You guys, I know Amazon means trouble (and even evil?) for many shoppers, especially those who favor books, but they have my pants. And so does Zappos. Like an answer to my petite prayers, my jeans cut through the ether and appeared on my little laptop screen.

My keyboard caught fire as I furiously clicked to buy them.

I’ve never tracked a package so obsessively. I’m trying to tamper my expectations, just in case the 545s aren’t quite as I remember them, but I really can’t imagine a more glorious reunion.

Are you devoted to a special pair of jeans? Does pants shopping strike anger and annoyance in your heart, too? When you find a style you like, do you tend to stick with it? (Jeans are just one of those things.)

13 thoughts on “The second coming of my favorite jeans”