A fellow blogger and fellow Meg (good name!) created a feature I’m thrilled to run with: Literary Locales, which focuses on the settings of the books we’re currently reading. Visit her site to join in the fun.

As I’m currently thick in the middle of the Indie Lit Award’s Fiction shortlist for judging in March, you might have noticed a dearth of book reviews around here — but I promise my reading life is alive and well! I’m just having to stay focused. Nose to the grindstone and all that.

My latest read is Lynn Sheene’s The Last Time I Saw Paris, set in Nazi-occupied Paris during the 1940s. It’s a dangerous and unsteady time for the French when a young, beautiful American socialite arrives to make a fresh start. She’s swept into the Resistance movement and eventually falls in love, though fate drags her into endless turmoil before the book’s smash of a conclusion. I was up early to finish it before work Wednesday, determined to learn Claire’s fate before I was back at my desk.

Though I enjoyed the story (and will have a review coming after the Indie Lit Awards’ Fiction winner is announced in March), the character I actually loved best in The Last Time I Saw Paris was Paris itself. Described as steadfast, loyal and lovely — even in the darkest of times — the novel only made my desire to visit the City of Light more powerful. The descriptions of Parisian cafes and blossoms in the spring were tantalizing, and I could clearly picture the awful juxtaposition of Hitler’s forces and the tender blooms of new trees come April.

When Claire arrives in Paris, she accepts temporary work at a flower shop — La Vie En Fleurs, or “Life In Bloom” — and studies the art under the stoic eye of Madame Palain. As the story progresses, La Vie En Fleurs’ role becomes increasingly important — and I could almost smell the fragrant blooms Claire assembled as she passed through dangerous Nazi-occupied zones. It was intoxicating, and now I’m determined to visit a Parisian flower shop myself. 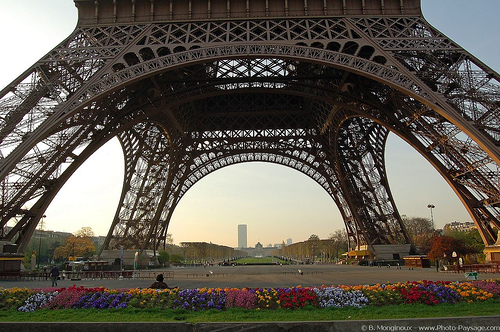 {Having never been to Paris (sadly!),
the lovely photos above are copyright their respective owners.
Click each image for the original file and additional information.}

7 thoughts on “La Vie En Fleurs: The City of Light in ‘The Last Time I Saw Paris’”