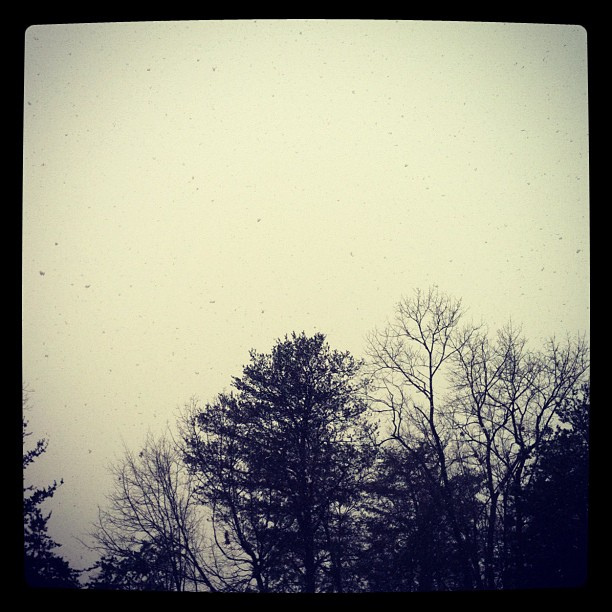 Something about snow still stops me in my tracks.

We don’t get much of it here in Maryland — most of the time, anyway. There was that freak storm in February 2010 that dropped more than three feet all over the D.C. area, and I’d certainly had enough of the nastiness by the time it all melted away.

But it’s usually calm here. Winters dip down to around 20-30 degrees on the rough days, but we can usually coast with temperatures in the 40s — even 50s. Maryland weather is nothing if not unpredictable. We’re seasoned to prepare for anything: hurricanes, tornadoes, flash flooding, earthquakes. And that’s to say nothing of snipers, terrorist attacks and bombings.

Maryland is Equal Opportunity for Disasters.

Snow isn’t a disaster, though. I was already snug at my desk when the flurries started yesterday, so no grip of panic seized my throat as I tried to figure out to get to work. Since we’re into the new year already, I have vacation and sick time o’plenty; and since it wasn’t predicted to last long, I didn’t have that worry about getting stranded at the office.

I could just enjoy it. The first real snowfall of winter.

I write often about enjoying the simple things in life. That’s what snow symbolizes to me: that untainted time when flurries meant school would be canceled, and all I had to worry about was dodging snowballs my dad and sister would aim at my knees. Snow days meant hot chocolate after helping Dad shovel the driveway and hours of Nickelodeon. No homework. Hanging out with Mom, who would usually take a “snow day” herself. Simple things.

I want 2012 to be more about those innocent joys. About taking time to breathe and free myself of needless worry. I don’t write often about my struggles with anxiety, but I’m weighed down — like all of us — with responsibilities and guilt and uncertainty. I’ve made great strides in the last few years and find myself a much happier, calmer person this January than last. But it’s a process.

As I shift and grow and change, I want to look out my office window and watch fat flakes of snow coat the sidewalks. I want to take in that quiet, serene vista without worrying how the weather — like so many things — will impact my scheduled, well-oiled day.

The best things happen when life doesn’t go as planned.

13 thoughts on “Snow and other unforeseen events”