This is my fifth post featuring a spring trip abroad.
For previous travel posts, visit here.

Undoubtedly one of my favorite moments on our great British adventure in April was our Burns Supper, or an evening we spent in the Scottish highlands eating delicious (and sort of scary) food, enjoying Scottish music and watching a spectacular sunset with our fellow tour group members.

If you’ve never heard of Robert Burns, “Scotland’s favourite son,” let me give you a brief introduction: he’s the most famous Scottish poet to have ever lived, most argue; his “Address To a Haggis” is epic and exceedingly well-known; and he was quite the charismatic chap with a reputation for lovin’ and leavin’ the ladies, if you pick up what I’m putting down. He’s well-known for verses like “A Red, Red Rose,” and our introduction to Burns’ work was highly entertaining.

Leading up to our Burns Night, we really didn’t know what to think. My sister and I actually had a running gag that this “supper” was going to be in the living room of some poor soul’s home. When forty of us arrived with our giant “coach” and blocked their narrow Scottish street, the innkeeper and their entertainers would have to run and duck for cover.

But not so. After spending a few minutes admiring the Scottish countryside, including the photo at top and the tower above, we arrived at a cozy hotel and were immediately greeted by gentleman in honest-to-goodness kilts. If you don’t think a man can look attractive in a plaid skirt? Ladies, get on a plane to Edinburgh. (Spencer, if you’re reading this, look away — like, go get some coffee or something.) As the gentle lilt of bagpipes poured over us, we exchanged smiles with a man and his sweetly-smiling son. And could you have pushed this American chick over with a feather when Duncan, the innkeeper’s very attractive son, asked how she was enjoying Scotland? YES. Yes, you could.

I didn’t take any pictures of Duncan. I was trying not to look creepy and bring disgrace to the good name of America. But I did get photos of the gentleman playing the bagpipes. And, you know, Duncan’s dad. And the sunset, upon which I was gazing and thinking, “Wow, it’s sunset. And I’m in Scotland.” 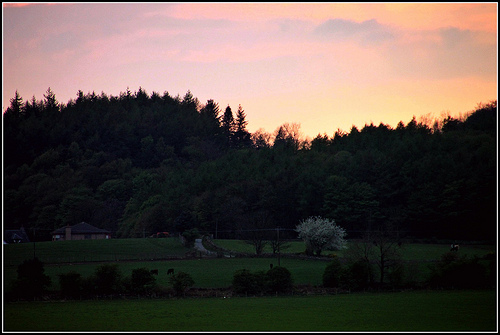 After enjoying the fading rays of another day in the Scottish Highlands, we migrated indoors and relaxed at a table with my parents, sister and a duo of our favorite travelers, Merv and his wife from Australia. I appreciated how understanding they were of our questions about things like Australian culture, money and politics. Not to go off on too much of a tangent, but one of the greatest things about touring with an organized group like Trafalgar Tours is the opportunity to meet so many different people. Though we don’t always keep up afterward, it’s fascinating to meet families and couples from our the world during your amazing trip together. No matter what, you’re always linked in that way. And it’s really such fun.

So dinner was interesting, warm and engaging. Duncan’s father — and that’s who he is; the talented innkeeper who kept us all in stitches — began to give Robert Burns’ most famous address: the one to a haggis. After poking fun at the tourists about what a haggis really is (and if you don’t know, maybe you don’t want to), a casing was brought out to the “oohs” and “ahhs” of the room. Our entertainer recited Burns’ poem, asked for volunteers and put on a very amusing show. 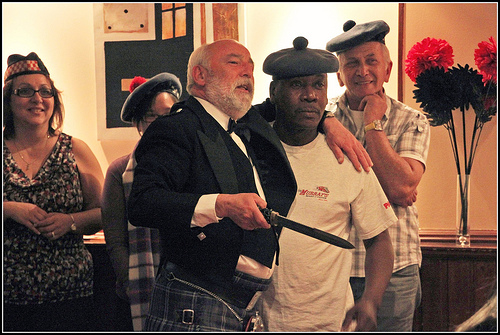 So how was the famous haggis, a delicacy most people on the tour were brave enough to try — even my mother? Not too bad, really. Meaty. Warm. Kind of squishy, but not gross. Sort of like sausage, really, but with a spicier kick than I’m used to eating. Not the most awesome thing in the world, but definitely not the most terrible. And since it was an absolute requirement that we do a shot of Scottish whisky (that’s whisky, friends, not whiskey) before consumption, that warm buzz might have helped me push through it. 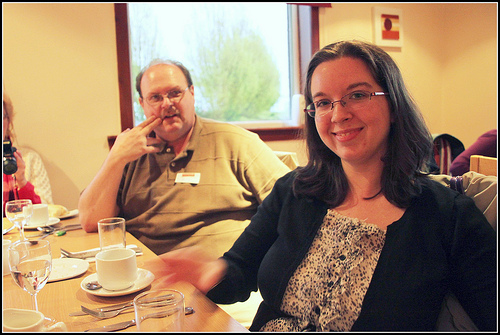 Our evening ended with authentic highland dancing and more lovely bagpipe music, and I was filled with the bubbly enthusiasm that typically accompanies an interesting evening out, good food and good company. Though jet leg was my constant companion during this entire trip, I really didn’t want the night to end. Waving goodbye to everyone as we boarded the bus again, I couldn’t help but think about whether or not I’d ever find that little tucked-away corner of the world again.

And the answer is “probably not,” because I really have no clue where we were.

That’s the other adventure of going on an organized tour: all the legwork is done for you. You sit back, relax . . . and wind up in very random locations you’d never be able to find by yourself.

Pros and cons to everything.