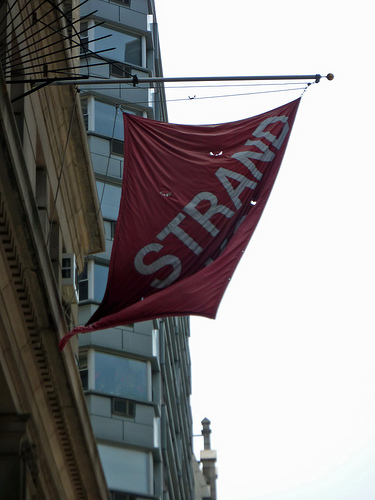 When putting together a schedule for the weekend trip we were making to New York City for Book Blogger Con, my dad asked me what I most wanted to see in the Big Apple.

The last time I was in the city, I was an awkward, oily 11-year-old on only one mission: to make my crush, Matt, notice me. Seated just across the way from me, Matt spent most of his time looking out a neighboring glass window and making boy talk with the kid next to him. My mom was a chaperone and my companion for the five-hour bus ride from my home in the D.C. suburbs, but that didn’t stop me from talking loudly and being silly, all in an effort to get that blonde-haired hunk to look in my direction.

He did. Once. If I remember correctly, it involved something about me “dropping” (read: throwing) a pen under his bus seat, a pen I then asked him to retrieve for me. Or something like that.

Oh, who am I kidding? I still have that pen, though it’s now under glass and in a well-lit corner of my room. A sign hangs above it, reading, “Matt touched this.” I keep it polished to, you know, remember that singular moment.

OK . . . not really. But I was so excited at the time, I might as well have created a shrine to the Pen Matt Touched so I could keep it pure and unsullied . . . forever. That was one of those perfect, crystallized moments in my adolescent life when it seemed like things were happening — like life was really, really exciting.

Looking back, it was probably just hormones.

Yes, friends, I was all kinds of not focused on anything in New York City almost fifteen years ago. And this time? Well, times have changed.

Mostly because Matt, a guy I haven’t seen in more than a decade, was nowhere nearby. And I was sending constant texts to Spencer, making our conversations my own little Twitter-like feed of everything I did for three days. (He’s a sweetheart for not telling me to shut up. One of the things I like about him: he lets me ramble.)

So when Dad asked me what it was I hoped to see and accomplish in NYC, I gave him the ready answer I’d been contemplating for months: we had to get to Strand Bookstore.

It’s huge, friends, and boasts 18 miles of books — a figure I totally believe. Split between three levels, books in every genre imaginable cover the impressive square footage. We went Saturday morning, the day after BBC, and must have joined half of New York in our quest to find a good paperback.

While I don’t exactly need any more books — I need to take an updated photo of my bookcase, which is embarrassing and actually collapsing in places — I couldn’t exactly leave Strand empty-handed. That’s ludicrous, am I right? I mean, I’m in New York City. For a book conference. Because I write about books. And read them all the time. I can’t just walk out of a giant bookstore without a book.

So I got Tinkers, a tiny slip of a novel by Paul Harding. I’d be a dirty liar if I didn’t admit that I bought it was because it was small. And light. And my shoulder was still aching from carrying around the awesome BBC swag bags the day before, and I had a very long day of walking around New York ahead of me, and I just couldn’t — could not — invest in a hardcover I would then spend the next two days lugging around.

And, you know, it won a little something call the Pulitzer Prize. Whatever that is. So let’s just hope it’s awesome.

Oh, and I bought a little notebook with “Strand” logos all over it. Because it was cute and $6 and also very light.

Apparently, I’m just into not carrying around heavy stuff anymore.

What else did I do at the Strand, friends? Well, wandered about with my sister and took silly photos, of course! And I even got her in on the action. The staff told us to “make ourselves at home” and feel free to use the ladders scattered around the place to grab anything we liked. The place was too packed with people of all ages, backgrounds, and interesting clothing preferences for me to look like a total weirdo, and if there’s one place we’re all welcome? It’s a bookstore.

And now I’m posting it for the world to see.

Enjoy. And the next time I’m in New York? Let’s all go there and act like weirdos. I’ll bring my camera, a shoulder ready to be burdened with great literature and, of course, a book lovin’ smile.

Edited to add: My dad, that crazy videographer, took a short clip of my sister, Mom and I browsing in the bookstore. From his perch on the stairs, he had a pretty good view! Check out the bottom of this post for that clip. 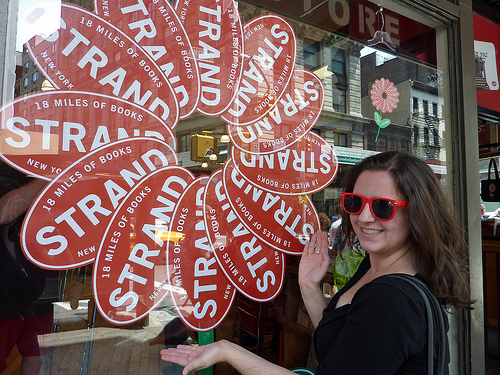 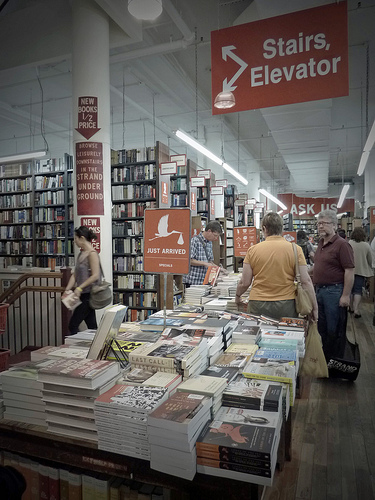 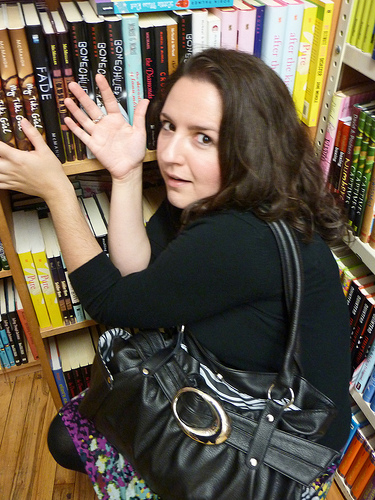 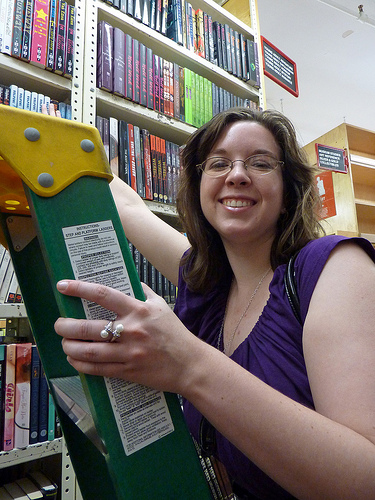 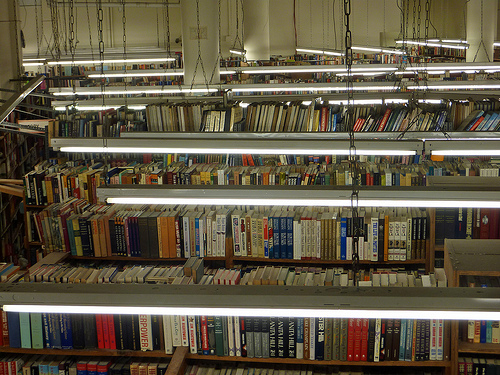