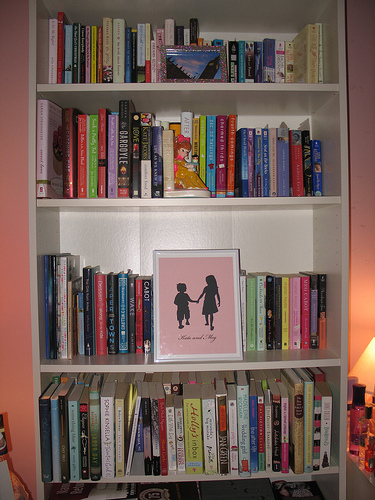 Standing in a bookstore with shelves of paperbacks lined up neatly before me, I can tell you something with absolute certainty: my eye is professionally (er, habitually?) trained to seek out pink.

During yesterday’s LitChat, a Twitter-based chat for book lovers happening at 4 p.m. EST on Mondays, Wednesdays and Fridays, the subject was chick lit — that occasionally controversial, usually light and fun genre. It’s no secret that I’m a huge fan of chick lit — or women’s fiction, a term which is sometimes used interchangeably, sometimes not — and spend a good deal of my time reading authors like Jennifer Weiner, Emily Giffin and Meg Cabot.

Getting into what defines “chick lit” is a topic unto itself, and I’m not here to get up on my literary soapbox and debate the general merits of a subgenre I really enjoy. Some folks dig it; others don’t. That’s perfectly fine. Should those who enjoy chick lit novels be derided? Of course not — just as those who enjoy graphic novels, romance, science fiction or any other type of literature shouldn’t be criticized. We like what we like, and I don’t judge. (Too much.) We’re all reading, and that’s what’s really important here.

No, friends, I’m here today to talk about pink books — and, specifically, how quickly my eye falls to them. During LitChat, some folks mentioned a book having a pink cover is actually a major deterrent — and that they might miss a great book simply because it has a silly or “frothy” cover. I can definitely relate and see where they’re coming from, though I’m on the opposite end of the spectrum: I tend to shy away from books without pink covers. Or ones with “boring” covers, at least.

And I’m sure I’m not alone in that. Some really fun stories I’ve read had very “girly,” chick-lit covers — the ones you can spot a mile away. As readers mentioned on Twitter yesterday, the types of covers you can spot immediately: maybe with a giant, overflowing purse, or a spike-heel shoe, or a gaggle of cartoonish women gathered together. Usually the colors are bright with a healthy dash of pink thrown in there. And who do they attract? Ladies like me, apparently.

Want some pink, girly book eye candy? I have plenty to share. And I know that for every book with a “frothy” cover I love, someone else will dislike the look of a novel for just that reason. Again, no worries — I can see both sides of the issue! And just because a novel features my favorite hue doesn’t mean it’s pure froth — quite the opposite, usually. Many of the books with seemingly innocent covers have some pretty heavy content, which is another criticism of some of the cover art. False advertising, if you will.

But for me? The pinker, the better.

21 thoughts on “Cover art: The pinker, the better”