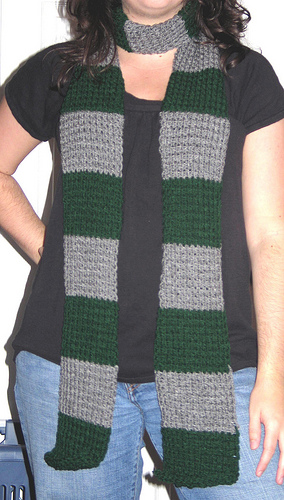 When I started my Etsy business in February, I never dreamed that I would someday spend all of my time making . . . “Harry Potter” scarves! And let me say this: I love every minute of it. I sold my first two scarves — in Gryffindor colors — to a customer for a movie premiere in July, and I couldn’t even begin to recreate the Supreme Dance Of Joy I did when that order came through. Especially since I was just about to throw myself an epic pity party and begin whining about how things just don’t seem to work out for me (which is patently untrue, but sometimes it feels true — trust me).

Since that fateful day, I’ve made more than twenty “Harry Potter” scarves for Halloween costumes, birthday gifts and just-for-me presents for people all over the U.S. and in Canada (!). Each has been in the classic burgundy-and-gold color scheme of the Gryffindor House at Hogwarts, the boarding school which teaches witchcraft and wizardry to its magically-inclined student body — which includes one Harry Potter himself.

I’m a huge fan of the series and originally created my first Gryffindor scarf to be worn by yours truly! I was still working at the bookstore when Harry Potter And the Deathly Hallows was released, and I got the great idea that I would dress as a Hogwarts student . . . until I was named mistress of ceremonies for our store-wide event. Because I’m awesome. (And, well, because no one else was willing to speak publicly and lead themed games for more than a thousand people in a very confined space. But let’s just go with I’m awesome.)

So the Gryffindor scarves have been a hit, and I’m very thankful — having projects to complete each night adds a totally new dimension of productivity to my evenings! And getting emails from folks who opened my work and are thrilled to death with the final product warms my wizard-loving heart. But this past weekend? I decided it was time to expand my product line. I have other scarves for sale, sure, but nothing else in the HP line. Allow me to present . . .

Will evil now triumph over good? I’ll keep you informed . . . 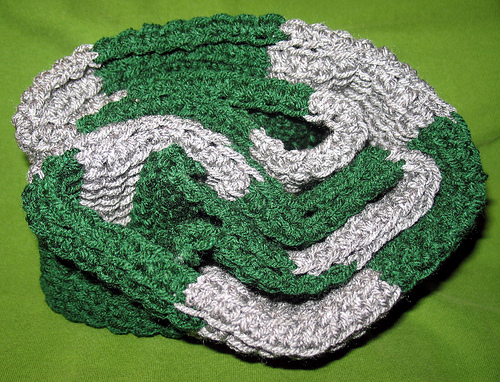