My obsessions are infamous. Whether we’re talking places (oh, London!), people (John Mayer, le sigh), colors (PINK!) or beverages (pumpkin spice lattes — you can’t ever have enough!), the items over which I lust and discuss endlessly are the things that really make up my days. Friends and family know me as much for the phases I pass through — some healthy, some not so much — as anything, and I’m always thrilled to find a new item upon which to pour my never-ending devotion! 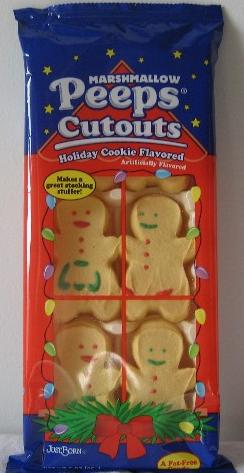 The latest in my string of bizarre but serious infatuations is nothing new to my mother, who has the (almost) thankless job of finding this item every holiday and making sure plenty of it winds up in our stockings at Christmas. I’m talking Peeps, friends — those delicious, smooshy and melt-in-your-mouth fantastic confections that appear in a variety of seasonal shapes and colors several times a year!

But not just any Peeps. Because anyone can find the typical, generic green Christmas trees or white snowmen at Wal-Mart or Target and toss them under the tree. Those are for sissies. What I want isn’t quite so easy to come by, but when they’re discovered? That’s PURE and UNADULTERATED JOY you’ll see etched on my face. Something no first kiss, iPod or book deal could achieve! (Well, maybe the book deal. But I’m still waiting to test that theory.)

They’re Gingerbread Peeps — and they’re sugar cookie flavored. They come in packages of six. They give me a reason to get up in the morning and keep living my life. Think I’m being dramatic? Allow me a moment of your time to recount this little scenario:

It’s a Thursday evening in November. My sister, a busy college senior, has just gotten home from a particularly grueling day. Judging by the fact that she’s barely uttered two words since walking in the door, I know not to make any sudden moves — like trying to have a conversation with her. In any capacity. Earlier in the day I’d made a stop at a local supermarket where I discovered — OMG OMG — that holiday Peeps were out for the season. I bought two packages and placed one where I knew she would find it.

As Kate wandered into the living room, eyes glazed over with exhaustion, there was no way I could miss that quick intake of breath as she realized — OMG OMG — she has the greatest sister in the universe. She stumbled to where I was sitting with a smug look on my mug, her own face totally morphed as she clutched the Peeps, utterly speechless. You’d have thought I gave her a one-way ticket to Hollywood — and marrying Zac Efron. That’s the power of the Peep, folks. Making sucky Thursdays pure magic.

My coworkers were intrigued by my own package of Peeps last week. I’d opened and quickly devoured two, then set the box aside in an attempt to ration myself. My gut instinct was to gobble them up before anyone would have a chance to ask me for one, because who am I kidding? I’m not sharing my Peeps. Need to borrow a pen, want some change for the vending machine, need me to spell an oddball word for you? No worries. But my Peeps? I apologized to Sandy after she expressed interest in them, but could only offer her a gingerbread foot — parting with a full Peep is simply too much to ask. You’d have better luck asking for my firstborn.

17 thoughts on “Ask for my firstborn, but not one of my Peeps”