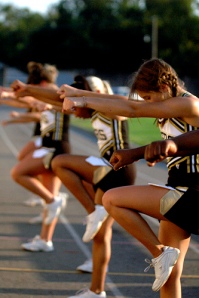 Apparently, not me. Photo by Richelle Antipolo

Trust kids to tell you the truth about something — and everything. Whether you’re prepared for it or not.

At a family birthday party this weekend, I chatted with Isabelle, my cousin’s four-year-old niece. Quite possibly the world’s cutest and most vivacious child, Isabelle loved putting pink lipstick all over the faces of her captivated audience and wowing us with her zippy one-liners, including “Did you know Michael Jackson has a sister?” and “God doesn’t like liars.” (I swear we didn’t provoke her!)

One of the most telling, though, had to come as we all gathered around in the backyard. Isabelle was swinging with my sister and me while her aunt — my cousin Ciara — sat nearby. After putting a full face of makeup on Katie and I and declaring us her “Fashion Girls,” Isabelle surveyed her work carefully. After a few moments she made a face, jumped up and flew over to sit in Ciara’s lap.

“Where are you going?” I asked her, laughing at her suddenly-smug expression from across the yard. “Aren’t you a Fashion Girl?”

Isabelle wrinkled her little nose at me, her whole face collapsing in disdain. Ciara looked over at us, bemused, as Isabelle tossed her long ponytail over her shoulder. “Um, we’re the Cheerleader Girls,” Isabelle then announced. “And you’re not.”

Kate’s eyebrows shot straight up as she laughed, her face just as shocked as mine. “What do you mean, not a Cheerleader Girl?” she asked Isabelle, who just grinned devilishly (and adorably, I have to say).

I could feel my whole stomach trembling with laughter, remembering my high school days that were filled with just about anything but cheerleading. I was a straight theatre geek, actress in all the school plays and editor of the school newspaper. I spent my time in the dark recesses of the school auditorium, learning lines and rehearsing and playing around with friends. My long hair has been, since the dawn of time, a bit unkempt . . . mostly because no contraption or amount of hair product can make it look the way I want. When you get to know me, I’m a little loud and bossy — definitely not one to float along with the crowd. In the literary world of Megan McCafferty, I fancy myself much more a Jessica Darling than, say, a Sara D’Abruzzi or Manda Powers. And I was always good with that.

But how is that even a four-year-old knows I’m not “one of them” — not a Cheerleader Girl?

Despite the fact that Isabelle and I continued to play and she did eventually come to the Fashion Girls, there was a sudden and crisp division between us that even my “Fashionable” status couldn’t save. Just like the summer I turned fourteen and stepped into the halls as a newly-minted high school freshman, I was standing in one clique looking out once again.

I guess high school really doesn’t end — even before you get there.

4 thoughts on “One of the Cheerleader Girls”