It’s official: Kate and I have our tickets to see “Twilight”! We’re going to the 11 a.m. showing tomorrow morning. I might have been up for going to a midnight release, but I was too afraid I’d get stuck around chatty and/or annoying people in the movie theatre. I tend to get… irate when people are making noise in the movies. This can include any number of a lengthy list of acts  I consider “poor movie screening etiquette.” But that’s a separate entry all in itself! 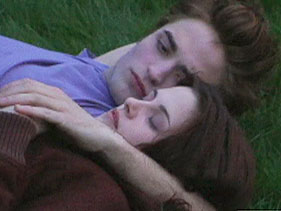 All right, back to “Twilight” — I’m ridiculously excited. I finished the book in June and, though I know many people have very strong feelings about it across the aisle, I think it’s going to be good. In fact, I don’t even care if it’s not good — I’m just looking forward to seeing all of the characters materialized.

There’s been such a frenzy over Stephenie Meyers’ series for so long now, I don’t know when it first came into my collective consciousness. I remember working at the bookstore two Christmases ago — around when Eclipse came out, I think — and getting into a long conversation with a father and his teenager daughter about what the books were about, exactly.

“It’s about love,” she said simply. Her father shook his head, smiling as if to say, “Kids. What can we do with them?”

I think the series is about love, though. And though they might not be the most lyrical, moving or articulated books in the history of the English language — and I know for sure that they’re not! — I found them fun, entertaining and addictive. Once I started the series at the beach, I couldn’t stop reading them. In fact, when I was working at the store (as I will be on Black Friday, apparently — I am contingent, after all!) I got into daily dialogues with customers about the series. Sometimes with one person an hour. This was pretty rare in my bookselling adventures! And waiting for Breaking Dawn to come out was nightmarish! But I did get to pass out the first book out of the first box at our bookstore the night of the release! Just like Harry Potter and the Deathly Hallows. So I have two claims to fame, right?