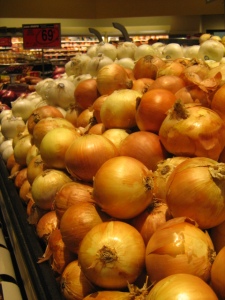 So last night was another culinary adventure — this time with a real recipe and everything! Dad got Rachael Ray’s 365: No Repeats cookbook pretty cheap and, after pouring through it for a little bit, much of it seems like something I’ll need a little more skill to attempt. But I did find this awesome recipe for chicken with mustard sauce! Since it didn’t require grilling, coring or baking, I figured I could give it a whirl.

My first stop was, of course, to the grocery store for my needed supplies. I even made a list and everything! How responsible of me! I went through the recipe on my lunch hour to figure out what we wouldn’t have in the pantry. This included onion, chicken broth, sour cream and fresh lemon. Grabbed that stuff and headed home.

Next up in my “thirty-minute meal” was to prep all my ingredients. I have to admit I had a little help from Dad on this part. The chicken breasts were huge so we cut them in half and trimmed off all the fat (we’re all on dietary restrictions around here; have to eat as healthy as possible.) I chopped up the onion, sliced the lemon in half (that was fun!) and dirtied way too many bowls. But I eventually got the chicken seasoned with thyme, lemon, salt and pepper. It was smelling pretty delicious already! Guess I was doing something right!

While the chicken was simmering away, I started on one of my two side dishes — Skillet Green Beans. I got the recipe at Allrecipes.com which, though I’m not being compensated for my glowing recommendation of said site, was incredibly useful! They have a million recipes for pretty much anything you could want. Since Palmer is getting healthy and we all need to stay healthy, I think I’m going to try a whole wheat pasta recipe tomorrow.

So I got the beans boiling, poured my sliced onion in a pan to saute with olive oil and worked on softening up all of my ingredients. The chicken was really starting to smell delicious so I went ahead and tried to speed the process along! 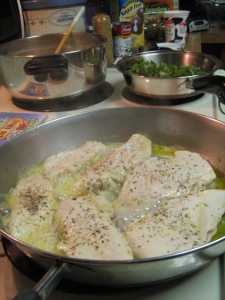 Finished heating the green beans, stirred them in with my softened (but not brown) onion and got ready to pull my chicken off the stove. Ray’s cookbook was pretty descriptive and helped me getting my bearings through this process! My handwritten Allrecipes.com guide was likewise simple. All that was left was to make the mustard sauce for the mustard chicken, and this required just taking the breasts out of the pan (we stuck them in the oven with French bread to keep them warm until serving), pouring in some low sodium chicken broth, sour cream and Dijon mustard and letting simmer for five minutes or so. Then — hot mustard sauce! I served this on the side and it made for a really nice kick. 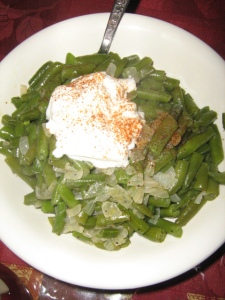 The green beans I sprinkled lightly with paprika and served with a big dollop of fat-free sour cream. You might not be sold on the sour cream idea, but trust me — it was delicious. As one other reviewer said on the recipe’s page, it was like a casserole-quality dish ready in just ten minutes. Delicious!

And the chicken was great, if I do say so myself! The mustard sauce was delicious and a little bitey, but not too much. The potatoes we added to the rest of the meal were just boiled, but they were still good. I didn’t have the energy to do a third creative dish in one night! But hey, there’s always tomorrow!

And everyone seemed to enjoy the meal — especially my sister, who came home from a hard day at college. Study on, sister! And I’ll keep attempting to prepare delicious meals for all of us!